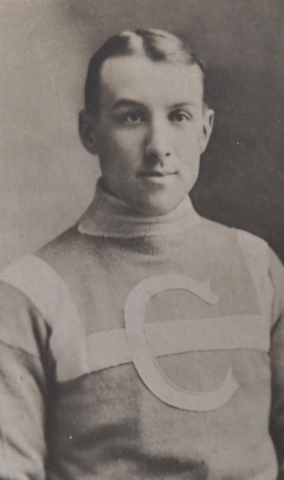 Joseph Jean Etienne Stanislas "Joe" Cattarinich - Born November 12, 1881 in Lévis / Quebec City, Quebec – Died December 7, 1938 in New Orleans, Louisiana, was a Canadian Ice Hockey defenseman, goaltender and co-owner of horse racing tracks in Canada and the United States as well as a co-owner of the Montreal Canadiens of the National Hockey League.

Cattarinich grew up in Quebec City and played Ice Hockey and lacrosse as a young man. Later, he lived in Levis near Quebec City. He is best known as the first goaltender of the professional Montreal Canadiens, then known as 'Les Canadiens'. He retired after Georges Vézina shut out Cattarinich's club in a game with Vézina's amateur Chicoutimi team (The Canadiens had been on a pre-season barnstorming tour to promote the upcoming season of the NHA). He was so impressed, that he recommended the Canadiens sign Vézina; and voluntarily stepped down, from his place on the team.(In those days, Hockey teams carried only one goaltender, as a rule.)

Cattarinich, though not a goalie by trade, was the third man to tend goal for the Montreal Canadiens. A steady defenseman for the Canadiens, Cattarinich was asked by coach Jack Laviolette to replace him after three games in goal himself. It is assumed that he played in 5 games before a man named Teddy Groulx finished out the final 7 games of the season. No statistical data is available for Cattarinich's stint in goal.

With longtime business partner Leo Dandurand, Cattarinich became prominent in the Montreal tobacco wholesaling business, but it was their popularization of the Parimutuel betting system at local tracks that provided their greatest commercial success. With the re-introduction of race track betting in the United States after World War I, the pair, known popularly as "Catta-Léo", extended their activities to racetracks in Chicago, Jefferson Parish, Louisiana, New Orleans, and others in St. Louis and further afield.

In 1921, along with Dandurand and Louis Létourneau, Cattarinich purchased the Montreal Canadiens of the National Hockey League from the estate of George Kennedy for $11,000. Although Dandurand was the active partner during their tenure (Cattarinich was known as "The Silent One" and Létourneau sold his stake in 1930), the Canadiens won three Stanley Cups with players such as Howie Morenz, Aurel Joliat, and Georges Vezina. After a series of losses (amounting to $40,000 for the 1934–35 season alone), Cattarinich and Dandurand sold the club to a syndicate comprising J. Ernest Savard, Maurice Forget, and Louis Gélinas in 1935 for $165,000.

Dandurand, Letourneau, and Cattarinich, owners of the Canadiens, presented an idea for a trophy to the National Hockey League in 1926-27 in memory of Georges Vézina. The outstanding goalkeeper collapsed during an NHL game Nov. 28, 1925, and died of tuberculosis a few months later - The Vezina Trophy was first awarded in 1927.

Cattarinich was elected to the Hockey Hall of Fame in 1977 as a builder.