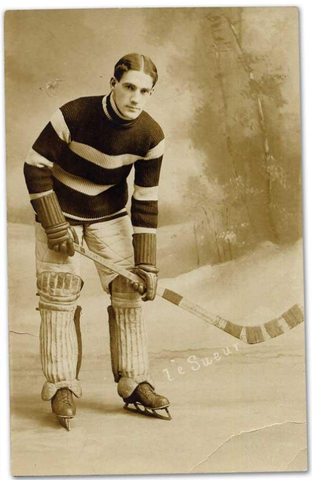 Percy St. Helier LeSueur (November 18, 1881 – January 27, 1962) was a Canadian senior and Professional Ice Hockey Goaltender.
He was a member of the Smiths Falls Seniors for three years, with whom his performance in a 1906 Stanley Cup challenge series attracted the attention of his opponents, the Ottawa Silver Seven. Although his team lost the series, LeSueur excelled in goal, keeping the games close. Nine days after the defeat, he joined the Silver Seven and played in a challenge match against the Montreal Wanderers. He remained with Ottawa through the 1913–14 season where he served as team captain for three seasons, and assumed coaching duties in his final season with the team.
LeSueur was traded to the Toronto Shamrocks for the 1914–15 season. After playing the following season for the Toronto Blueshirts, he enlisted in the army and fought for Canada during the First World War. He returned to Hockey following the conclusion of the war, serving in various roles including referee, coach, manager, arena manager, and Hockey journalist. He coached ten games in the National Hockey League (NHL) with the Hamilton Tigers. As a journalist, he was the first reporter to include shots on goal statistics in game summaries.
During his playing career, LeSueur improved upon existing ice hockey equipment: he invented the gauntlet-style goaltender glove which protected the forearms, and created and patented the LeSueur net which was designed to catch high-rising shots. LeSueur was inducted into the Hockey Hall of Fame in 1961, and died a few months later following a lengthy illness.

Smith Falls
Born in Quebec City, Quebec, LeSueur played amateur Hockey in his hometown with several teams on the right wing.[4] For the 1903–04 season, he moved to Smiths Falls, Ontario, to play for the Seniors. When the team's usual goaltender fell ill, LeSueur agreed to play goal.
In March 1906, the Seniors issued a challenge for the Stanley Cup to the Ottawa Silver Seven. (During that era, teams were allowed to challenge the present Cup holder once a year for possession, provided they were part of a senior hockey association and had won their league championship.) In the two-game, total goals series, Smiths Falls lost the first game 6–5, and the second game 8–2. Both games were played at Dey's Arena in Ottawa, on March 6 and 8. Despite giving up 14 goals during the series, LeSueur's work in net was impressive: the Montreal Star remarked that his performance in the first game had kept the Seniors in contention, noting that the "most spectacular saves of the match were made by him"

Ottawa Hockey Club
Following his team's loss in the challenge match, LeSueur, a bank clerk, moved 60 kilometres northeast along the rail line to Ottawa. (During his playing years, it was customary for players to have an occupation outside of Hockey.) Impressed by his performance, the Silver Seven asked him to join their team. Ottawa had lost confidence in its previous goalkeeper, Billy Hague, following a 9–1 defeat at the hands of the Montreal Wanderers in the first game of their two-game, total-goals Eastern Canada Amateur Hockey Association (ECAHA) playoff series for control of the Stanley Cup. The Silver Seven called the timing of LeSueur's arrival a coincidence, but with an eight-goal lead in the series, the Wanderers did not protest LeSueur's eligibility.
In the second game, played on March 17, LeSueur surrendered an early goal to Moose Johnson but subsequently held the Wanderers scoreless while the Silver Seven scored nine straight goals to bring the two teams even. Frank Smith appeared to put Ottawa ahead 11–10, but what would have been his seventh goal of the game was disallowed by an offside call. The Wanderers responded with a "furious attack", resulting in Lester Patrick scoring two late goals, leading Montreal to a 12–10 series victory and the Stanley Cup. LeSueur was the first goaltender, and one of only two (with Hugh Lehman, 1909–10) to play for two different teams in Stanley Cup challenges in the same season.

LeSueur played for Ottawa through the 1913–14 season. In 1908, he was the team's sole representative at the Hod Stuart Benefit All-Star Game, played on January 2. Stuart, a member of the Wanderers squad who won the Stanley Cup in 1907, had drowned in the previous off-season and the ECAHA responded by organizing an All-Star game, the first of its kind in any sport, with its proceeds going to Stuart's widow and their two children. The Wanderers defeated a team of All-Stars, made up of the top players of the league's other teams, 10–7. LeSueur remarked in the Ottawa Free Press that while joining the Silver Seven was his "biggest thrill", his participation in the All-Star Game came a "close second".
In the 1909 ECHA season, LeSueur won the Stanley Cup with the Ottawa, now nicknamed the Senators, after the team led the league with 10 wins. During the same season, he wrote a 48-page booklet entitled How to Play Hockey, a work similar to Arthur Farrell's handbook Hockey: Canada's Royal Winter Game, the first book published on ice Hockey, 10 years earlier. LeSueur's book was particularly popular among youngsters.
LeSueur was named captain of the Senators for the 1910–11 season. The team led the regular season standings in the National Hockey Association (NHA) with 13 wins, regaining possession of the Stanley Cup. LeSueur was the league leader in goaltender wins in both the 1909 and 1910–11 seasons, having appeared in every game Ottawa played. During 1913–14, his last season with the Senators, LeSueur served as both the coach and captain of the team.

Toronto
LeSueur was traded to the Toronto Shamrocks for Fred Lake and $300, as the Ottawa club engaged Clint Benedict for its goaltender's job. At the time of the deal, LeSueur had been the last member of either the 1909 or 1911 Stanley Cup winning teams still in Ottawa. Coincidentally, LeSueur's last season with Ottawa also marked the end of the Stanley Cup challenge era. In Stanley Cup play, LeSueur had a 7–2 overall record and was undefeated in seven games with Ottawa.
After one season with the Shamrocks in 1914–15, LeSueur finished his playing career with the cross-town rival Toronto Blueshirts in 1915–16. He had a losing record with both Toronto clubs. LeSueur initially became a full-time practicing accountant after retiring as a player, but enlisted with the 48th Highlanders, who served as the 134th Battalion of the Canadian Expeditionary Force in the First World War.

Post-war
Following the war, LeSueur returned to Hockey in a variety of roles. Over time, he appeared as a referee, coach, manager, arena manager, and journalist. His first job was as a referee in the National Hockey League (NHL). Afterwards, he coached in the minor leagues and the NHL. In 1921, he was behind the bench when the Galt, Ontario intermediate team won the Ontario Hockey Association (OHA) championship. He was appointed the Hamilton Tigers' head coach for the 1923–24 NHL season, but coached only the first 10 games of the 24-game schedule. When LeSueur was fired, the team had a 3–7 record, and finished the season last in the standings with an overall record of 9–15.
LeSueur went on to manage several arenas and guided the creation of new teams. As manager of the Windsor Arena and the Detroit Olympia, he helped assemble an ownership group that acquired the Victoria Cougars from the Western Hockey League (WHL) prior to the 1926–27 season. The team joined the NHL as the Detroit Cougars, now known as the Red Wings. In the 1928–29, he managed the Peace Bridge Arena in Fort Erie, Ontario. He guided the Buffalo Bisons' entry as an inaugural member of the International Hockey League (IHL) when it split from the Canadian Professional Hockey League (CPHL), and served as the team's coach. LeSueur joined the Syracuse Stars of the IHL as head coach for the 1930–31 season, but was replaced mid-season by Frank Foyston. LeSueur also managed the Syracuse Arena. While he was an IHL coach, he used his spare players during game intermissions to explain the rules of Hockey to new spectators.
Following his coaching and managing career, LeSueur turned to journalism. He was a columnist for The Hamilton Spectator, and was the first reporter to list shots on goal in game summaries. In addition to writing, he was a radio broadcaster. He used this role to help sell the game in regions without an ice hockey tradition. LeSueur was an original member of Hockey Night in Canada's "Hot Stove League", a panel of Hockey writers which discussed issues within Hockey.

He was inducted into the Hockey Hall of Fame in 1961 as a player. In 1968, he was posthumously inducted as one of the 55 original members of the Ottawa Sports Hall of Fame.

Playing style and innovations
During LeSueur's career, ice Hockey rules forbade goalkeepers from lying, sitting, kneeling, or otherwise falling onto the ice to make a save. Forced to play a stand-up style, LeSueur was aggressive in goal and was sufficiently athletic to be able to stop two or three shots in quick succession. Hockey historian Bill Fitsell noted that he had an "intense roving style", playing the puck outside of his crease in a style popularized forty years later by Jacques Plante. His playing style was exemplified in a game against the Quebec Bulldogs, where LeSueur was reported to have sprinted towards and "floored" an opposing forward who was on a breakaway.
Described as a "thinking man's custodian", LeSueur is credited with two major innovations to ice Hockey equipment. Around 1909, he experimented with using a baseball catcher's glove with extra padding to catch the puck. LeSueur later developed gauntlet-style gloves to protect the goaltender's forearms. He also designed the patented LeSueur net which was used from 1911 to 1925, first by the NHA and then its successor, the NHL. The net was designed to trap rising shots, with the rear frame 22 inches behind the goal mouth at the bottom of the net but only 17 inches at the top. Art Ross later improved on LeSueur's design, and his eponymous net was used by the NHL from 1927 to 1984