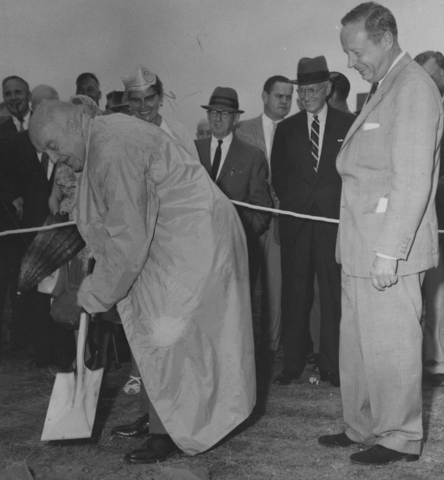 Fred "Cyclone" Taylor turning the first sod for the Hockey Hall of Fame building on the C.N.E. grounds, Toronto in 1960.

Foster Hewitt is standing at right.

By 1986, the Hall of Fame was running out of room in its existing facilities and the Board of Directors decided that a new home was needed. The Hall vacated the Exhibition Place building in 1992, and its half was taken over by the Canadian Sports Hall of Fame. The building was eventually demolished — a portion of the building's facade was preserved as an entrance to BMO Field stadium. Development of the new location, the former Bank of Montreal at the corner of Yonge and Front Streets in Toronto, began soon after. The building, now part of Brookfield Place, was designed by Frank Darling and S. George Curry. The new Hockey Hall of Fame officially opened on June 18, 1993. The new location has 4,700 m2 (50,600 sq ft) of exhibition space, seven times larger than that of the old facility. The Hockey Hall of Fame now hosts more than 300,000 visitors each year