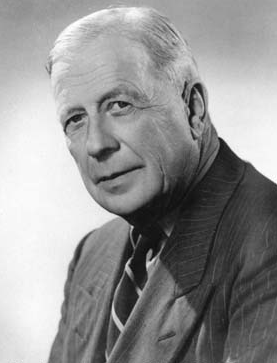 Lloyd James Turner (Born August 9, 1884 in Elmvale, Ontario – Died April 7, 1976) was a Canadian sports promoter, and was known primarily for constructing Hockey arenas, organizing Hockey teams and leagues, and contributing significantly to the popularity of the Allan Cup.

Turner's first real experience with Hockey began in Sault Ste. Marie, Ontario. While living in the Soo his involvement in Hockey grew and he suited up with the same amateur squad as the well-known brothers George, Harold and Howard McNamara. Despite becoming involved in Hockey, Turner was still primarily a baseball player, and his work at Hockey rinks in the winter was designed to help pay for baseball equipment to be used in the summer. Turner honed his organizational skills at this time by working as the icemaker and personnel manager for the rink when he wasn't playing.

In 1906 he relocated briefly to Fort William, Ontario where he was the player/manager of the city's Hockey club.

When the Turner family moved to Calgary, Alberta in 1907, Turner played as the catcher for the team in Calgary, where he was the only non-American player in the Western Canada Baseball League. However, this is where his reputation as a Hockey promoter grew.

At the time, Hockey was still young throughout Western Canada, and one of his primary goals was to help establish the game. One of his first tasks was to transform the old Sherman Arena from a roller skating rink to an ice Hockey venue. He added ice, established a team and a new league while continuing to thrive as a player/manager. Turner's efforts were rewarded with a provincial amateur title in 1914. When the Sherman Arena burned down in 1915, Turner opened an open air facility across the street to keep the team going.

In 1918 Turner made his greatest impact on the Hockey fortunes of Calgary by leasing the horse show building at the Calgary exhibition grounds and adding ice. During this period he worked diligently to create a Hockey league with two teams each in Calgary and Edmonton. This circuit became known as the Western Canada Hockey League and expanded to Saskatoon, Regina, Vancouver, Victoria, Seattle and Portland. Turner personally managed the Calgary Tigers, who played so well in the WCHL that they challenged the Montreal Canadiens for the Stanley Cup in 1924, albeit in a losing effort.

Following the Stanley Cup setback, Turner sought a new challenge in Minneapolis, Minnesota. He spent four years there and won a league championship with the Minneapolis Millers of the American Hockey Association in 1925-26.

Turner went to Seattle, Washington in 1928, where he helped guide the Seattle Eskimos in their brand new Civic Ice Arena for 2 seasons.

Turner returned to Calgary in 1931 to re-structure the Western Canada Hockey League during its merge with the former Pacific Coast Hockey Association franchises. The new league would become the Western Hockey League. The following year he headed a company that installed artificial ice in the Calgary arena that kick-started that trend across the Prairies.

In the 1930s, Turner changed his focus to senior amateur Hockey. The Allan Cup had been around since 1908 but often had trouble attracting a sufficient number of entrants. Turner's boldest move to enhance the profile of the Allan Cup competition was to guarantee Dr. WG Hardy, then-president of the Canadian Amateur Hockey Association (CAHA), $1,500 for every Allan Cup tournament finals game played in Calgary. The local media did its part to drum up support and raise the level of consciousness in southern Alberta. Turner personally financed the use of special trains from Lethbridge, Medicine Hat, Red Deer and Drumheller to ensure that fans within 150 miles of Calgary would have easier access to the finals. The result was a resounding success. The arena was jammed, the Hockey was superb, and the status of the Allan Cup was elevated via radio broadcasts and newspaper reports. Over the next several years Calgary hosted both the semi-finals and finals and the revenue generated went towards a much needed nest egg for the CAHA.

Turner created and managed several more leagues, teams, and tournaments throughout his life. He concentrated efforts on creating military and civilian tournaments, and also set up organized Hockey for the First Nations tribes of Alberta. This began with the Calgary-based Southern Alberta Indian Tournament that featured three nearby tribes. The competition grew throughout the province and Turner donated trophies for junior, intermediate and senior divisions for the Alberta First nations population. His commitment and sincerity earned Turner the honourary title "Chief Sitting Bull" from the Stoney Tribe.

Turner was inducted into the Alberta Sports Hall of Fame in 1980 for contributions to Hockey.