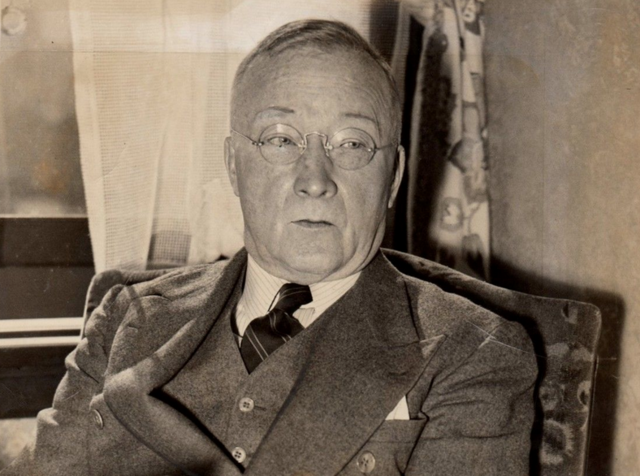 Calder was the English born son of Scottish Parents.

Calder is most notable for serving as the first president of the National Hockey League (NHL) from 1917 until his death in 1943. He was the last president of the NHL's predecessor league, the National Hockey Association (NHA) and was instrumental in the transition from the NHA to the NHL, a transition made to expel a franchise owner. He presided over the expansion of the NHL from Canada into the United States while at the same time fending off of rivals to the NHL's status as the premier ice Hockey league.

Growing up, Calder was an excellent athlete, excelling in rugby, handball, golf, and soccer. As a young man, Calder decided to emigrate to North America as opportunities were expanding with the Industrial Revolution. Calder actually flipped a coin to decide on whether to go to the United States or Canada, and Canada won the coin toss. Calder emigrated to Montreal, Quebec where he became a teacher at a private school. It was there where he met his future wife in Amelia Cole, and they were soon married after their meeting.

One of Hockey's greatest visionaries, Frank Calder guided the National Hockey League through its first half-century. He addressed all issues affecting the league decisively and logically and his steadfast dedication to its betterment garnered him the permanent respect of his peers.

Prior to becoming a executive in Hockey, Calder worked as a sports editor at the Montreal Witness. From there, he moved to the Montreal Herald and Daily Telegraph. After that, he passed the role of sports editor to Elmer Ferguson so that he could move on to take the financial editor's chair, in which capacity he covered what was Canada's largest market at that time: the Montreal Stock Exchange. He maintained his interest in sports, creating the Montreal School Rugby League. He was the secretary-treasurer of the Montreal Football (Soccer) Association in 1903 and remained in that position until at least 1911, when he represented the organization at the time of the founding of the Province of Quebec Football (Soccer) Association. He was elected a member of the executive committee of the PQFA in 1911 and 1912. Earlier he was a referee and had refereed the game between the Montreal All-Stars and the touring Corinthians from England in 1906.

Calder possessed a knowledge of sports and a direct and insightful way of speaking. Former Montreal Canadiens owner George Kennedy was so impressed with Calder's forthright style that he helped facilitate his election to the position of secretary of the National Hockey Association on November 15, 1914, forerunner to the NHL.

Formation of NHL - In 1917, the NHA's owners decided to drop Eddie Livingstone's Toronto Blueshirts franchise and took his players. The NHA's president, Frank Robinson, seeing he was as powerless as his predecessor Emmett Quinn was, resigned as NHA president. Calder, the league secretary, saw opportunity in the situation. He decided that the NHA owners allied against Eddie Livingstone needed someone to represent them, and, in effect, Calder was—at least for all practical purposes—the new president of the NHA. He arranged meetings between the NHA's owners to figure out how to get rid of Livingstone. They decided to form a new league, the National Hockey League, in the NHA's place. Calder was elected president of the new league which was officially established on November 26, 1917.

Calder also acted as the NHL's secretary and treasurer. For years, he was the leagues sole employee.

Calder helped ensure the survival of the NHL during the two world wars and the Great Depression. The two global conflicts depleted the numbers of available players, while the worldwide economic downturn caused several franchises to cease operations or relocate to other cities. A big reason why the league was able to weather these storms was the proactive involvement of Calder as president. He made a point of attending as many games as possible to monitor the state of the league on the ice and in the community. If he felt the actions or policies of the various team governors weren't in the best interests of the NHL, he didn't hesitate to confront them.

Calder became all-powerful as the President of the NHL. It was his way or the highway, and the owners rarely challenged him on any decisions with his knowledge of the league's rules. However, Calder wasn't ruling with malevolence. Instead, he worked hard for the owners and the league. Struggling franchises were quickly moved to new locations with new owners, and he backed the owners in struggles with the players. A good example of this was when the Hamilton Tigers' players went on strike before the NHL Final in 1925 after they demanded more money. Calder heard their case, but he backed the owners 100% and suspended the Tiger players. Along with the suspension, he fined each of the players $200. Because of his actions, the players never played another game in Hamilton, and Calder moved the franchise to New York City.

Calder was adamant that minorities would not be restricted in the NHL. During the 1927–28 season, upon hearing of the Boston Black Panthers, the first all-Black Hockey team in the U.S., he was reported to have remarked that, "Pro Hockey has no ruling against the colored man, nor is it likely to ever draw the line," Calder's remarks were clearly aimed at Major League Baseball, but the door was swung wide-open in the NHL for all men to participate.

Calder was the driving force behind the Ace Bailey and Howie Morenz charity games, demonstrating his sincere concern for the players in the league and their families.

Calder is credited with being a Builder in the sport of ice Hockey. If one build's by tearing down, then Calder was a master builder. Within five years of the league's foundation, six of the seven men who owned stakes in NHL clubs had sold out or been forced out. Calder received kickbacks for the conversion of Eddie Livingstone's property - the Toronto Arena Company, and Calder should be held accountable for the loss of ten Canadian major-league franchises -- Quebec/Hamilton, two Montreal teams, Ottawa, Toronto, Saskatoon, Edmonton, Calgary, Vancouver and Victoria. Three U.S. teams also disbanded on his NHL presidency.

Calder's quest for power and control, led to aggressive expansion in the Unite States, with teams owned by deep-pocketed backers, who had little knowledge of or respect for Hockey. While the Tex Rickards and Frederic McLaughlins brought large bank rolls to the NHL, they also drove proud franchises such as the Ottawa Senators and the teams of the Western Hockey League, which could not afford to compete in the same financial arena, out of business. The closing of the Western Hockey League in 1926, in particular, helped stymie the development of the game in the West. Under Calder's presidency, major league Hockey contracted from thirteen teams in 1926 to six at the time of his death in 1943.

By 1943, Calder's dedication to the job had caused his health to deteriorate. He was honoured during the NHL's 25th anniversary celebrations, but Calder was overwrought from trying to maintain the survival of the league in the face of World War II. The strain of trying to balance the demands of the game with the needs of the military caused him to collapse at a league meeting. Calder was presiding over a meeting of the NHL's board of governors on January 25, 1943 when he suffered a heart attack. While he was being treated at the hospital, he suffered a second heart attack. Eight days after suffering two consecutive heart attacks, Calder traveled to Montreal and checked into Montreal General Hospital. It was there where his heart finally gave out as he suffered a fatal heart attack. He was 66.

A plan had been made to grant Calder a much-deserved rest and have Mervyn "Red" Dutton temporarily assume his responsibilities. Unfortunately, Calder passed away the day after the motion was passed. He literally gave his life in the service of the National Hockey League.

Frank Calder is interred in the Mount Royal Cemetery in Montreal, Quebec.

Calder originated the rookie of the year award commencing with the 1932–33 season, Calder named the top rookie in the NHL. Starting in 1936–37, he convinced the NHL's board of governors to let him buy a trophy, and Calder bought a trophy each year to be given permanently to the outstanding rookie. After Calder's death, the NHL presented the Calder Memorial Trophy in his memory and the trophy is to be kept in perpetuity.

The Calder Cup is the trophy awarded annually to the champions of the American Hockey League. It is the second oldest actively awarded professional ice Hockey playoff trophy after the NHL's Stanley Cup. The trophy is named after Frank Calder.