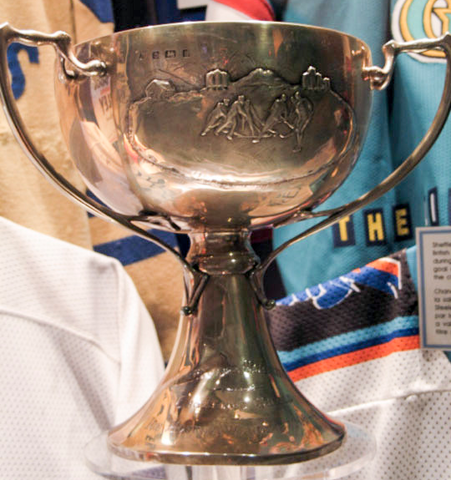 The Varsity match trophy from 1910 was discovered after 90 years shut away in an attic. The trophy had been lost at the outbreak of the First World War after Cambridge's victory in the 1913 game. On the 23rd July 2003 the trophy was presented to the Hockey Hall of Fame in Toronto, where it has remained proudly displayed to this day.

It is a beautiful solid silver cup engraved with the image of an early ice Hockey match in progress on a lake in the Swiss Alps. England's Cambridge and Oxford Universities battled for this trophy. The caption reads: 'Oxford - Cambridge Challenge Shield, Ice Hockey, Wengen [Switzerland], 1909-10.' Last seen after Cambridge's victory in the 1913 Varsity Ice Hockey Match, the cup was lost at the outbreak of the First World War.

The trophy dates from the early years of that rivalry. When Cedric Molton Fiddian, the president of the Cambridge University Ice Hockey Club at the time, went off to war in 1914, this solid silver cup was stowed away in the family home for safekeeping. Cedric was wounded in the war; other team members never returned. The team was temporarily disbanded and the cup was forgotten. Cedric eventually became principal of the King's Choir School and the story goes that whenever it got cold enough for the lakes to freeze, he cancelled classes and took the entire school ice-skating.

Cedric's son Bill found the silver cup when he and his wife unpacked the attic following the death of his father. As they did not know that the Cambridge University Hockey team was still in existence, his wife used the beautiful bowl, which she kept highly polished, as a flower vase for several years. It only came to light again as a result of an article publicizing the current Cambridge team in a local paper, which inspired Bill Fiddian to give the trophy back to the Cambridge University Ice Hockey Club.

"It gives the Cambridge University Ice Hockey Club great pleasure now to present this trophy to the Hockey Hall of Fame, not only as unique piece of hockey heritage, but also as a memorial to those past heroes of the game,"