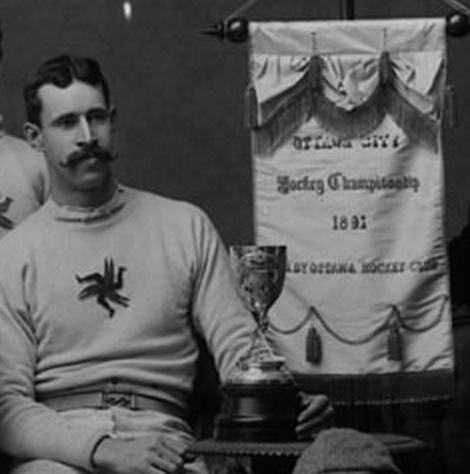 Philip D. Ross was a successful politician and newspaperman who worked hard to ensure that the early Stanley Cup challenges were of a high standard. No individual had more involvement with important decisions surrounding the Cup and the first Canadian amateur Hockey leagues than Ross.

Ross was a builder and sometimes player of the Ottawa Hockey Club, later to be known as the Ottawa Senators. With this club, he befriended the sons of Lord Stanley, the Governor-General of Canada, and played with two of Lord Stanley's sons on the Rideau Rebels team that did much to popularize the game of Hockey in Ontario. In 1892, Lord Stanley appointed him to be a trustee for his championship ice Hockey trophy the Dominion Hockey Challenge Cup, known today as the Stanley Cup.

After Lord Stanley donated the Stanley Cup bearing his name, and appointed Ross as one of its trustees, Ross was vigilant about preventing any abuses of the competition that could tarnish the image of the trophy. A few decent teams were turned down by Ross in this effort to ensure that each Stanley Cup challenge would be competitive and exciting.

Ross was co-founder of the Ontario Hockey Association in 1890. He played in the first Ontario championship game in 1891 at the Rideau Rink in Ottawa, helping Ottawa win 5-0 over Toronto St. George's.

Ross was one of the two original Trustees of the Stanley Cup named by Lord Stanley in 1893, and so served for over 50 years until his death in 1949.

Ross also served as trustee for the Minto Cup of lacrosse.

Philip Dansken Ross was inducted into the Canadian Sports Hall of Fame in 1974.

Philip Dansken Ross was inducted into the Hockey Hall of Fame in 1976.

The Ontario Heritage Foundation erected a plaque commemorating Philip Dansken Ross 1858-1949 at the Journal Towers, Kent Street between Laurier and Slater, Ottawa. "A distinguished journalist widely admired for his candour of expression and depth of knowledge, P.D. Ross was publisher-owner of the Ottawa Journal and one of the founders of the Canadian Press."