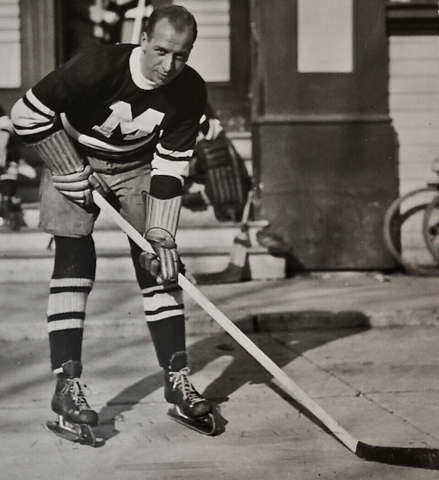 McMannus played his minor Hockey in Toronto after moving to Canada at almost 2 years old. By 17 he was skating with the Toronto Canoe Club in 1928. He remained on the team's roster for another year before heading to the east coast.

While in eastern Canada he played with several teams including the New Glasgow Tigers of the Cape Breton Senior Hockey League, Fredericton Capitals and Moncton Hawks of the Maritime Senior Hockey League / MSHL. In Moncton, McManus became a fan favourite, helping the Hawks win the 1933 Maritime Shield as MSHL champions and advanced to the Allan Cup play-downs, where they went on to win the 1933 Allan Cup championship with McMannus contributing a goal and two assists in eight games defeating the Saskatchewan Quakers in Vancouver.

McManus then led the MSHL in goals with 25 (48 points) in 38 games during the 1933-34 season. The core players remained together and once again the Hawks were the Maritime Shield and Allan Cup champions in 1934 with McMannus providing the bulk of the team's offensive, netting eight goals and 17 points in 12 games. They were the first team to win successive Allan Cup titles with the same roster.

The excellent play by McMannus in the Allan Cup did not go unnoticed. The NHL's Montreal Maroons signed him to a free-agent contract in October, 1934. He made his NHL debut on November 13, 1934 vs the St. Louis Eagles at St. Louis Arena in a 2-1 OT Maroons win. He played 25 games with Montreal that year, but with the likes of Earl Robinson, Herbert Cain and Russ Blinco providing the bulk of the offense, it left little ice time for McMannus, who managed just one assist while with the club. In the 1935 NHL playoffs, McManus played in just 1 game on March 23. The Maroons would go on to the 1935 Stanley Cup championship. That season McManus also played for the Windsor Bulldogs (IAHL) and New Haven Eagles in the Can-Am league.

McMannus was traded to the New York Rangers for $ 10,000 in cash the next season, and was sent to play for their minor league team the Philadelphia Ramblers in the Can-Am league, where he 40 points in 43 games, making the first All-Star team. He
was traded a couple more times to NHL teams, but only played one more game in the NHL, that with the Boston Bruins on November 7, 1936.

Boston sent McManus to the Providence Reds for the 1936-37 season, where he played for 2 years, helping Providence win the 1938 Calder Cup as International-American Hockey League (AHL) champions.

McManus returned to the Maritime leagues in Canada and played in two more Allan Cup tournaments, one with the Saint John Beavers in 1944 and other with the Moncton Maroons in 1946. He played his final year of Hockey with the Moncton Hawks in 1946-47 at the age of 35, and went out in grand style, having produced one of the best offensive seasons of his career, potting 37 goals and 71 points in 32 games.

The Moncton Hawks were inducted into the Maritime Sport Hall of Fame in 2015 (inaugural).