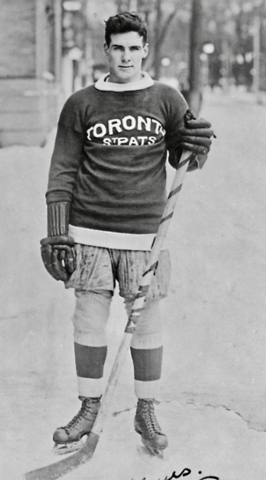 Dye made his NHL debut with the newly named Toronto St. Patricks on December 23, 1919 vs the Ottawa Senators at The Arena in a 3-0 Ottawa win.

Dye was known for his very hard shot and accuracy. His shots were capable of snapping a two-inch thick plank, and Jack Adams recalled seeing several of Dye's drives punch clean through the back-rests of arena seats and even through the 1/8-inch thick wire mesh used as crowd protection at Toronto's Arena Gardens. Opposing defencemen would attempt to knock down long shots made by Dye from centre ice, only to find out in dismay that their sticks had been shattered in two.

Cecil "Babe" Dye was inducted into the Hockey Hall of Fame in 1970.