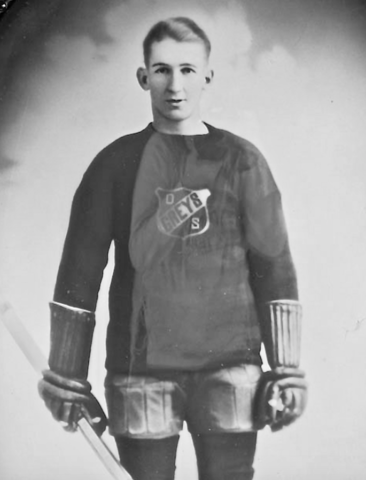 Burmister was one of the fastest skaters ever turned out of this Hockey town of Collingwood. He was 130-pound, five-foot-six, fifteen year-old little rabbit had a tough time making the 1921 Collingwood Junior team, perhaps the greatest junior club to represent Collingwood in O.H.A. competition. That was the year that the Collingwood Bees almost knocked off the famous Stratford Midget, led by Howie Morenz. They must have been good! Four members of that team Burmister, Bern Brophy, Artie Clark and Clyde Dey went on to pro careers. Roy starred for two more years with Collingwood junior and intermediate teams, went to the Owen Sound Greys in 1925, to the Niagara Falls Cataracts under the late Gene Fraser in the Senior ranks in 1926 and that same season Niagara Falls became pat of the newly formed Can-Pro International League. Burmister signed for eight hundred dollars and a job.

For the next three years, Burmister drew down N.H.L. pay while shuffling between the Americans and New Haven. It was a pretty good financial situation for Roy, as he beat a path between New Haven and New York, but the shuttle service arrangement cost him a couple of Americans League scoring championships. It seemed that every time he got up there in the American League scoring lead, the Amerks ran into injuries and back to the Madison Square Garden went Burmister. In the succeeding years he played for the Can-Am Boston Cubs, London and Windsor in the International, Hockey League / IHL back to the Can-Am Philadelphia Arrows, then a championship year with American Hockey Association / AHA St. Louis Flyers in 1935-36, winning the 1936 Harry F. Sinclair Trophy. His final 3 years were with the St. Paul Saints from 1936-7 to 1938 and finally closing off his career with the Kansas City Greyhounds in 1938-39.

Roy Burmister was inducted into the Collingwood Sports Hall of Fame in 1974.