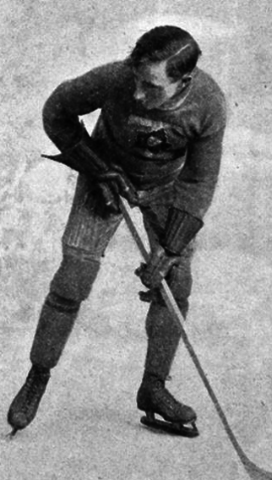 Carson would then attend the University of Toronto in 1920, where he began his first year of dental school, also joining their varsity collegiate Hockey team, the Toronto Varsity Blues. Conn Smythe was his coach. The Varsity Blues made it to the 1920 Allan Cup final, losing to the Winnipeg Falcons. Carson scored 9 goals, 4 assists during the playoffs.

Carson was noted for his speed on the ice, and his ability to score with a strong Hockey sense.

After graduating, Carson joined the Grimsby Peach Kings for the 1923-24 season, and was also invited by the Granite Hockey Club to play in 5 exhibition games with the Toronto Granites, where he scored 9 goals, 2 assists.

Carson then signed with the Stratford Indians for the 1924-25 season, where he scored a career high 29 goals (8 assists) during a 20 game season. He followed that up the next year with 19 goals, 3 assists in 17 games.

The NHL Toronto St. Pats noticed Carson's performance and boasted his signing with the team in 1926. The manager and coach Mike Rodden wanted everyone to know that he was bringing in new blood, placing much hope and trust in Carson, who scored 16 goals, 6 assists in his NHL rookie year. He scored his 1st NHL goal on November 20, 1926 vs Lorne Chabot of the New York Rangers. The St. Pats would become the Toronto Maple Leafs half way through 1926-27 the NHL season.

Carson would be at center ice when the Maple Leafs had their 1st home opener on November 15, 1927 at Arena Gardens in Toronto. The Honorable W.D. Ross, Lieutenant-Governor of Ontario, performed the ceremonial faceoff between Bill Carson of the Maple Leafs and Bill Cook of the New York Rangers. Rangers won the game 4-2, but Carson scored the 1st goal of the season in the 2nd period for Toronto in the loss. Carson went on to score 20 goals during the season (6 assists), the most of his NHL career, and also became the first player in Maple Leafs history to score 20 goals in a season.

Carson played 24 games for the Maple Leafs, when they traded him to the Boston Bruins on January 25, 1929. He only scored 4 goals (2 assists) for the Bruins remaining 19 NHL games, but scored the biggest goal of his career in the playoffs, when Carson scored the 1929 Stanley Cup winning goal on John Ross Roach of the New York Rangers, March 29, 1929. This was the first time in Stanley Cup history that two American-based teams met in the Final, and the 1st Stanley Cup championship for Boston.

Carson played with Boston during the 1929-30 season, scoring 7 goals, and helping the Bruins to a record of 38-5-1, which translates to an .875 winning percentage, the best in NHL history. Carson scored 1 goal in 6 playoff games, helping the Bruins reach the 1930 Stanley Cup finals, losing to Montreal.

Boston traded Carson to the London Tecumsehs of the International Hockey League / IHL for cash, November 24, 1930, where he played only seven games. Although he retired from Hockey, two years later he attempted a comeback. That was in 1933 and played a full season with the New Haven Eagles of the Can-Am league.

Bill Carson was inducted into the Bobby Orr Hall of Fame in 2003.