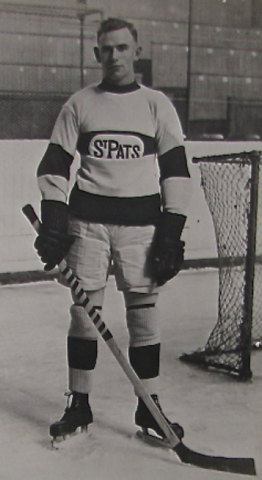 Jackson played ice Hockey for Amherst Academy in 1916–17 before joining the military in 1917. During his military service, he played for Toronto RFC in the Toronto National Defence League.

Upon his return from service Jackson played from 1919 until 1923 in the Maritime Hockey League for the Amherst Ramblers, and they also lent him to the Stellerton Professionals for their 1922 playoffs. Jackson also made his NHL debut on January 4, 1922 playing 1 game for the Toronto St. Pats.

Jackson played another full season in Amherst before joining the Toronto St. Pats for the 1923-24 season. He scored his 1st NHL goal on Sammy Hebert of the Ottawa Senators on March 5, 1924, the final game of the season for Toronto.

After playing 3 games for the St. Pats to start the 1924-25, Jackson was traded to the Boston Bruins, where he played 24 games, scoring 5 goals, 2 assists. He played one more season in Boston, before splitting the 1926-27 season between 3 teams, the Ottawa Senators, the Can-Am league New Haven Eagles and finishing the season in the Canadian Professional Hockey League / Canpro, playing for the London Panthers.

Jackson played for the Panthers for the next 2 seasons, before they traded him to the Can-Am league Philadelphia Arrows in 1929. He played another season for the Arrows, before finishing his career with the Buffalo Bisons of the International Hockey League / IHL. He helped the Bisons win the 1932 F. G. "Teddy" Oke Trophy as IHL champions.