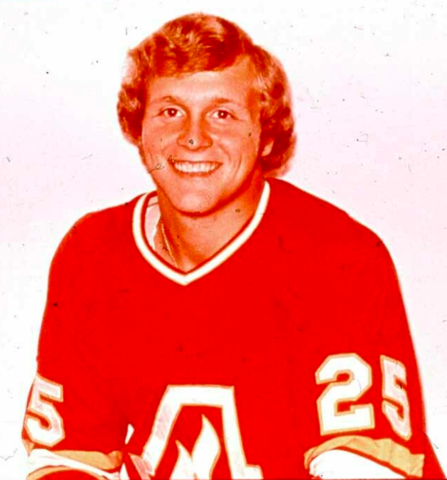 Vail played his first junior Hockey with the Sarnia Legionnaires (Jr. B) in the 1969-70 season, and was then signed with the junior A Niagara Falls Flyers, and would play in Niagara Falls for 2 seasons, scoring 43 goals, 78 assists with 198 penalty minutes in 119 games.

Vail split the 1972–73 OHA season between the Sault Ste. Marie Greyhounds and the Sudbury Wolves, scoring 48 goals and 105 points combined between the two teams, and impressed NHL scouts enough that in 1973, he was the third choice (twenty-first selection overall) of the Atlanta Flames who had just completed their first season.

Vail made his pro debut with the Central Hockey League / CHL’s Omaha Knights, scoring 10 goals and 18 assists in 37 games. The Flames called Vail up to the NHL, and he played the final 23 games of the season in Atlanta, scoring 2 goals, 9 assists. He also played in 1 playoff game.

To be eligible for the NHL's Calder Memorial Trophy as its rookie of the year, rules stipulate that players can not have played in more than 25 games, so in 1974-75, now a full-time left-winger for the Flames, Eric Vail was still considered a rookie. That season, he scored 39 goals on 177 shots for a 22% shot percentage and finished with 60 points, winning the 1975 Calder Memorial Trophy -- the first in Flames history to win a major NHL award.

Injuries reduced Vail's offensive output in 1975–76 as he scored only 16 goals, a team second 31 assists for 47 points. The team went 35-33-12 and finished in third place in the Patrick Division. They lost in the first round to the Los Angeles Kings, two-games-to-zero, with Vail having 0 points.

Vail rebounded to score 32 goals, 39 assists in 1976–77. He earn an invitation to the 1977 NHL All-Star Game, the only such appearance of his career. The Flames had a 34-34-12 record, then lost in the opening round of the playoffs to the Kings, two-games-to-one. Vail led the team with four points, 1 goal, 3 assists.

Vail also made his only appearance with the Canadian National Team, scoring four goals in nine games for the fourth place Canadians at the 1977 World Ice Hockey Championships.

Vail scored 22, 35 and 28 goals in his following three seasons and set a career high with 83 points (35 goals) in the 1978–79 season. The Flames again lost in the first round of the playoffs each season.

In the 1979–80 season, Vail passed Tom Lysiak as the Flames' all-time leading goal scorer. His 174 career goals was the most in the Flames' tenure in Atlanta, and he was second to Lysiak with 383 points.

Vail moved to Calgary, Alberta when the team relocated there, becoming the Calgary Flames for the 1980–81 season. He had 28 goals, 36 assists in 64 games in his first season in Calgary. The Flames posted a 39-27-14 record, then earned their first playoff series win in three straight games to the Chicago Black Hawks. They followed that with their second, defeating the Philadelphia Flyers in seven games before losing to the Minnesota North Stars in six. Vail appeared in six games, but did not register a single point.

Vail had been clashing with head coach Al MacNeil, and he was often accused of coasting on the ice and carried a reputation for "living large" off the ice, and the Flames often felt Vail was playing below his capability.

Vail started the 1981-82 season in Calgary, scoring 4 goals, 1 assist in 6 games, but was sent to their minor league team the CHL Oklahoma City Stars, where he played just 3 games, when the Flames stated that "Eric Vail and the Calgary Flames were no longer compatible", General Manager Cliff Fletcher traded the team's all-time leading scorer to the Detroit Red Wings in exchange for Gary McAdam and a draft pick (John Bekkers) on November 10, 1981. Vail scored 10 goals, 14 assists for the Red Wings in 52 games, but the Red Wings were also frustrated by the way Vail was playing, and sent him to their American Hockey League / AHL affiliate, the Adirondack Red Wings for their final 10 game of the season.

Vail played in Adirondack for the 1982-83 season, scoring 20 goals, 29 assists, and retired at seasons end.

Vail returned to Atlanta following his Hockey career, ultimately settling in Lawrenceville, Georgia, where he managed a nightclub. When the NHL returned to Atlanta in 1999, Vail joined the Thrashers organization in a community relations capacity and served as an in-arena analyst for the team's radio broadcasts.