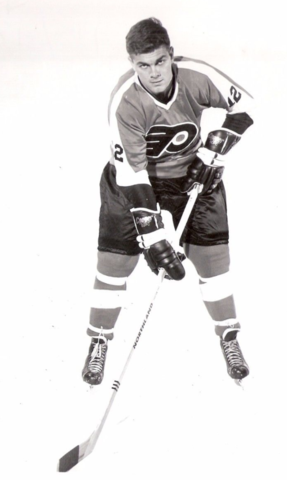 Dornhoefer played his junior Hockey with the Niagara Falls Flyers of the Ontario Hockey Association, reaching the championship final of the 1963 Memorial Cup.

The Boston Bruins had held the rights to Dornhoefer, and made his pro debut with the Bruins in 1963-64, playing in 32 games, scoring 12 goals and ten assists, while also playing for their farm team, the Minneapolis Bruins during the season, and scored 21 goals and 30 assists in Minneapolis.

Dornhoefer had a slow start the next season, playing 20 games for the Bruins without a goal, and was sent to the WHL San Francisco Seals to finish the season, where he scored 10 goals and 25 assists in 37 games.

Dornhoefer again had a slow start with the Bruins in 1965, getting 1 assist in 10 games and was sent to the AHL Hershey Bears where he remained for the next 2 seasons. During that time in Hershey, Dornhoefer learned the pro game, while also developing his gritty style amassing 187 penalty minutes - 117 in his final season in Hershey.

Dornhoefer was left unprotected in the 1967 NHL Expansion Draft. The Philadelphia Flyers selected him with the 13th pick overall, and from there his career was defined.

In that first year with Philadelphia, Dornhoefer scored 13 goals and 43 points while accumulating 134 penalty minutes and gaining a reputation as a hard hitting, grinding left winger with a touch for scoring. Two seasons later he reached the 20-goal plateau for the first time, a mark he would achieve in five seasons.

By 1971-72, the Flyers organization was clearly looking to enhance its rough style, and that was echoed in Dornhoefer's increase in penalty minutes. He sat for 183 minutes in the box that year. In 1973 he had his best season, scoring 30 goals and 49 assists for 79 points in 77 games and being named to play in the All-Star Game. The most famous play of his career came in the 1973 Stanley Cup playoffs when he scored a crucial overtime goal against the Minnesota North Stars on a solo rush. The goal was memorialized on a statue at the Spectrum, which was demolished in 2010-11.

The Flyers, called goons by some Hockey observers, and also known as "The Broadstreet Bullies" could also play Hockey, and that was what made them special. The pieces all came together for the Flyers in the 1973-74 season when they upset the heavily favoured Boston Bruins in the 1974 Stanley Cup finals to claim their 1st NHL championship.

Dornhoefer was perhaps at his best in the playoffs. His unequaled work ethic and body checking is most valuable in the post season, but Gary scored some big goals in the playoffs - none bigger than in the seventh game of the 1975 semi finals against the New York Islanders. His goal just 19 seconds into game 7 deflated an upstart New York Islanders team. The Flyers went on to win the 1975 Stanley Cup championship vs the Buffalo Sabres and the famed "French Connection" line of Perreault, Martin, and Robert in six games.

The Flyers advanced to the Stanley Cup finals again in 1976, looking for their third consecutive title, but the Montreal Canadiens were in the process of building yet another dynasty, and defeated the Flyers in 4 straight games.

Although hampered by injuries throughout his career in consequence of his bruising style, Dornhoefer remained an effective scorer through his penultimate season, and was named to play in the All-Star Game again in 1977, and finished that regular season with a +47 plus/minus mark. The season thereafter, missing nearly half the season through injury, his scoring touch disappeared completely, and he retired after the 1978 playoffs.

After his retirement following the 1977–1978 season, Dornhoefer moved to broadcasting. He worked a short time in Philadelphia locally, then moved back to his native Ontario, Canada to work on Hockey Night In Canada as a color commentator from 1978 – 1987. After a six-year hiatus from broadcasting, Dornhoefer moved back to Philadelphia in 1992 and joined the Flyers broadcast team, originally working with play-by-play man Gene Hart. He served as a Flyers' color analyst through the 2005–06 NHL season.

Gary Dornhoefer is a member of the Philadelphia Flyers Hall of Fame.

Quote from Philadelphia Flyers Captain Bobby Clarke in 1978 - "If you hear somebody say 'that guy is a Dornhoefer-type player,' that's a helluva compliment. He was a player who gave our team character every time he stepped on the ice."