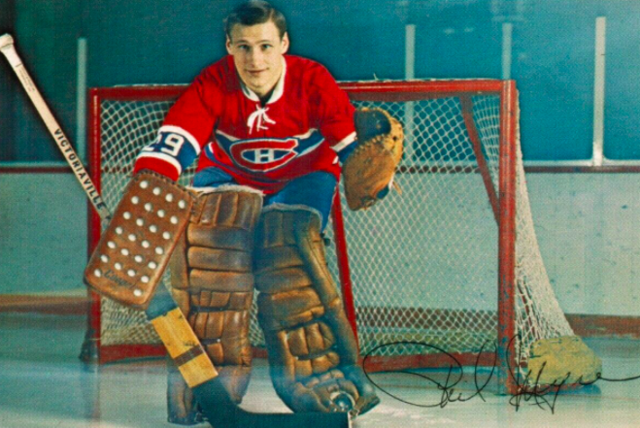 Myre then played parts of three seasons (1969-72) with the Canadiens, while also playing for their new affiliate, the Montreal Voyageurs of the American Hockey League / AHL. Myre played in 10 NHL games his first season in Montreal, and had his NHL debut on December 30, 1969 vs the St. Louis Blues. Myre got his 1st NHL victory on January 3rd, 1970 vs the Oakland Seals.

In the 1970-71 season, because of an injury to Rogie Vachon, he played 30 regular season games and dressed for 70. He also got his 1st NHL shutout on October 15, 1970 vs the Buffalo Sabres at The Aud in Buffalo. However, during the playoffs, the Canadiens went with rookie Ken Dryden. When Montreal won the 1971 Stanley Cup, Myre was included in the team picture and was given a Stanley Cup ring, but his name was left off the Cup (because he did not dress for any playoff games), even though he qualified.

Myre had his best NHL season Playing for the Flyers, winning 18 games, tying 15 and losing 7 during the regular season in 1979-80, helping the Flyers win the Patrick Division championship and they won the 1980 Clarence S. Campbell Bowl as the 1979-80 Clarence Campbell Conference regular season champions with 116 points. Myre and rookie goalie Pete Peeters backstopped the Flyers through an undefeated streak of 35 games, an NHL record. Myre then played in 6 playoff games, winning 5, as the Flyers made it to the 1980 Stanley Cup finals, losing to the New York Islanders.