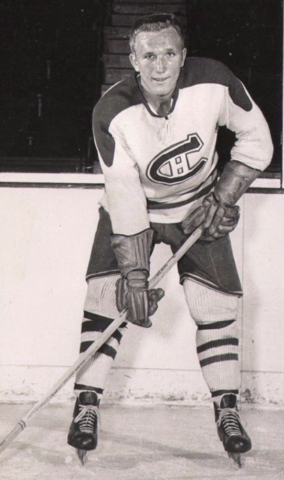 Masnick was a junior standout with his local Regina Pats and scored 44 goals in 40 games in 1949-50, and was signed as a free agent by the Montreal Canadiens on October 10, 1950.

Masnick played 43 games as a Canadiens rookie in 1950-51 and scored two goals in the post-season, before his team lost in the Stanley Cup final.

Masnick spent most of the 1951-52 season in the American Hockey League / AHL with the Cincinnati Mohawks, but returned to Montreal to help the Canadiens reach the finals. He reclaimed his place in the lineup the next year and scored a goal in the post-season when the Canadiens won the 1953 Stanley Cup championship.

During the 1953-54 season, Masnick scored a career-high 26 points playing with Floyd Curry and Calum Mackay and helped Montreal reach the finals where they lost to Detroit.

Masnick split the 1954-55 season between senior Montreal Royals, the Canadiens, and the Chicago Black Hawks. This was followed by productive 20-goal seasons in the WHL Winnipeg Warriors and the AHL Rochester Americans, before being traded to the Toronto Maple Leafs by Montreal for cash, September 30, 1957. Masnick played 41 games for the Maple Leafs in 1957-58.

Masnick played his last five pro seasons in the minors with the WHL Saskatoon Quakers, Victoria Cougars and scored a career high 90 points for the IHL's St. Paul Saints in 1961-62. He retired the next season after averaging over a point per game for St. Paul.