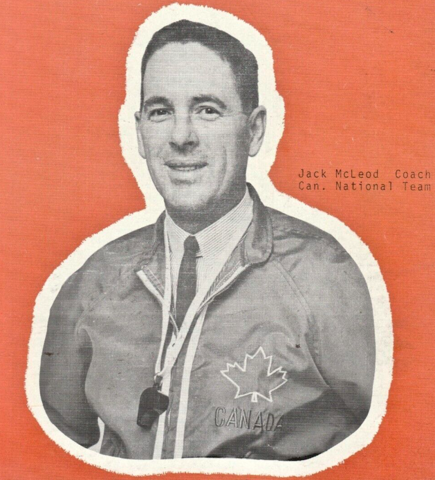 McLeod played for the Galt Terriers representing Canada at the 1962 World Championships, helping them win the Silver Medal, scoring 11 goals (6 assists) finishing 2nd in scoring at the tournament and being selected the Media All-Star Team.

McLeod turned to coaching at the end of his playing career. First with the Moose Jaw Canucks in 1964-65, then the Canadian National Team picked him up for the next 5 years from 1965 to 1970.

McLeod coached the Canadian National team the World Championships Bronze Medal in 1966 and 1967, along with the Bronze Medal at the 1968 Winter Olympics in Grenoble, France. At the 1966 world championships, McLeod was the player coach, scoring 4 goals (2 assists).

McLeod then coached the Saskatoon Blades in the Western Hockey League for many years.

Jack McLeod was inducted into the Saskatchewan Sports Hall of Fame in 1984.

Jack McLeod was inducted into the International Ice Hockey Federation Hall of Fame in 1999.

Jack McLeod was selected as the 2006 recipient of the WHL Governors Award.