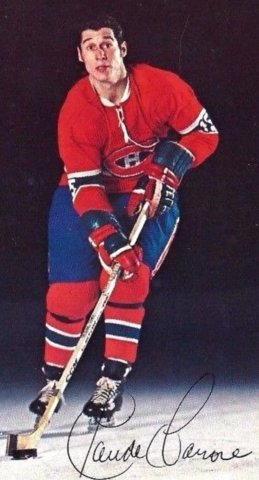 Larose played most of his junior Hockey for the Peterborough Petes, scoring 70 goals, 80 assists in 161 games for the Petes, but it was his toughness that stood out, and he had a 150 penalty minutes in his final year with the Petes in 1961-62. The Montreal Canadiens prospect then played for the Hull-Ottawa Canadiens to finish the 1961-62 season, scoring 3 goals, 2 assists in 7 games.

Larose played the 1962-63 season with the Hull-Ottawa Canadiens, while also getting the call up to the Montreal Canadiens for 4 games during the season.

The next year, Larose played with the Central Professional Hockey League / CPHL Omaha Knights, leading the team in penalty minutes with 105 during the regular season. Larose also played 23 games for the Canadiens during this season, scoring 1 goal in 2 playoff games he played in.

Prior to his joining the Montreal Canadiens, the team suffered from a lack of toughness. Larose was one of those players Sam Pollock thought could add toughness without sacrificing speed and scoring and he was right. Over a 16-year career, 10 with the Canadiens, Larose scored 226 goals and added 257 assists for 483 points in 943 NHL games, and reached the 20 goal mark five times in his NHL career. He also had 887 career penalty minutes.
"We became the toughest team in the League in 1963–64, which dismayed the opposition," Canadiens captain Jean Beliveau wrote in his autobiography.

Larose had a off year in the 1967-68 season, and was sent to the CPHL Houston Apollos, and then traded to the Minnesota North Stars the following season. Larose had 2 good seasons playing in Minnesota, and Montreal got him back for the start of the 1970-71 season, and led the Canadiens in penalties during the 1971 Stanley Cup Playoffs, when Montreal upset both the defending champion Boston Bruins and the powerful Chicago Black Hawks, as the Canadiens won the 1971 Stanley Cup championship.

Returning from an injury in the 1973-74 season, Larose was thrown onto a line with the Mahovlich brothers, Frank and Peter, and scored four goals against Pittsburgh's Gary Inness. He got a hat trick the next game while playing the right wing with Jacques Lemaire and Steve Shutt. Paired with them again, he got two goals the following game.

"I think that's still a Canadiens' record, nine goals in three games," Larose has said, "I'd just come back from the broken leg I suffered the year before. I started playing around Jan. 15. Yvan Cournoyer then got hurt and they put me in his place. A lot of people still remind me about that. We could not figure out what was happening. I'd shoot, they'd go in.

Today he is a pro scout for the Carolina Hurricanes.

Where do you keep your Stanley Cup ring?
Of the six rings I won, I’ve only kept one of them. The only one I have is the last one I received when Carolina won the Stanley Cup in 2006. I wear it everywhere I go. The ones I won as a player with the Canadiens, I’ve either given to my son or I’ve sold.