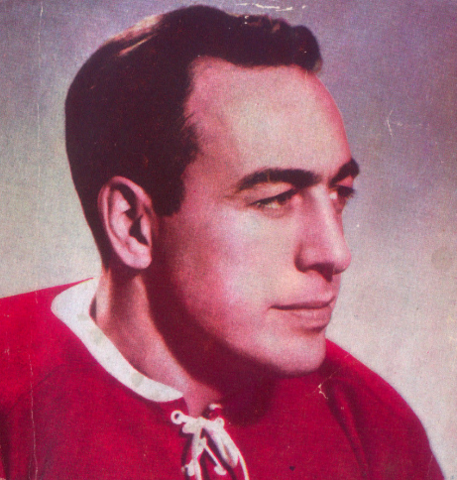 Although his given name was Hector, no one knew him as anything but 'Toe,' a nickname he picked up because a younger sister, unable to pronounce 'Hector,' called him 'Hec-toe'.

Blake bought his first pair of skates at age 12, with money he earned from hitching horses to milk carts for a dairy, and later played his minor Hockey in the town of Coniston, near Sudbury, Ontario. He played his first junior Hockey in 1929, in the Nickel Belt Hockey League with the Cochrane Dunlops.

Blake then signed with the OHA Sr. Hamilton Tigers at the start of the 1932-33 season, scoring 9 goals, 4 assists during his first year there. In the 1933-34 season, Blake scored 19 goals, 14 assists during the regular season, and then 9 goals, 5 assists in the playoffs, helping the Tigers win the OHA Sr. championship, and then reaching the Allan Cup finals.

Blake played another season for the Tigers, but then signed with the NHL Montreal Maroons on February 22, 1935, and made his NHL debut two days later on February 24, against the Chicago Black Hawks. Blake played in 8 games for the Maroons (0 points) to finish the season, and 1 playoff game, but none in the best-of-five Stanley Cup final. The Maroons won the 1935 Stanley Cup championship, and Blake had his named inscribed on the Cup for the 1st time.

Blake started the 1935-36 season with the Providence Reds in the Canadian-American Hockey League / Can-Am under coach Bert "Battleship" Leduc. On February 13, 1936, the Montreal Canadiens acquired him in a trade with Bill Miller and Ken Gravel for goalie Lorne Chabot going to the Maroons. Blake had been enjoying a solid year with the Reds, scoring 12 goals, 11 assists. Blake played 11 games for the Canadiens to finish the season, scoring 1 goal, 2 assists.

Blake had showed flashes of the brilliance that was yet to come, and would lead the NHL in scoring with 24 goals, 23 assists in the 1938-39 season. He was awarded the 1939 Hart Trophy as the league’s Most Valuable Player, and voted to the NHL First Team All-Star - his first.

The next 3 seasons were good, if not average for Blake, but he did pickup the nickname 'The Old Lamplighter' for his scoring prowess. Blake was also named the Canadiens captain for the start of the 1940-41 season. At the start of the 1942-43 season, Canadiens coach Dick Irvin had an idea. He put the veteran left-winger Blake on a line with two promising youngsters – centre Elmer Lach and another left wing, Maurice Richard, who was moved to the right side. Irvin’s move turned out to be a stroke of genius and the “Punch Line” was born. They became one of the most dynamic trios in Hockey history. Blake scored 23 goals, 36 assists in the regular season, and 4 goals, 3 assists in the playoffs, as the Canadiens fell to the Bruins in the semi-final.

The 1943-44 season was quite something for Blake, as he matched his highest NHL point total to date, having 59 points (26 goals) in only 41 games, and then in the playoffs, he scored 7 goals, 11 assists. In the finals vs the Chicago Black Hawks, Blake had 1 goal in the first game, 1 assist in game two, 1 goal in game three, and then he scored the overtime winner in game four, as the the Canadiens won the 1944 Stanley Cup championship in a 4 game sweep.

The following season (1944-45), the Punch Line became the second set of linemates ever to finish first, second, and third in NHL scoring in one season - Lach had 80 points, Richard 73, and Blake with a career high with 29 goals and 67 points. All three linemates were selected for the NHL's First Team All-Star that year.

Blake had another strong season in 1945-46, matching his career high in goals with 29 (50 points) and only one penalty all season, winning the 1946 Lady Byng Trophy as the league's most gentlemanly player. In the playoffs, Blake scored 7 goals, 6 assists. He only had 1 point in the finals vs the Boston Bruins, and that point was a goal in the 5th game, the 1946 Stanley Cup championship goal. Blake also added a Second Team All-Star selection in 1946.

Blake had another 50 point season (21 goals) in 1946-47, and the Canadiens reached the 1947 Stanley Cup final, losing to the Maple Leafs in six games. The Canadiens won the 1947 O'Brien Trophy as NHL playoff runner-up.

Blake started the 1947-48 season with 9 goals, 15 assists, then late in the third period of a game against the New York Rangers on January 11, 1948, Blake was checked by Bill Juzda and fell awkwardly into the boards. "Toe seemed to catch his left skate in the ice," reported the Montreal Gazette. "He trierd to get up but fell back again and players and officials crowded around him. As he was carried off the ice on a stretcher, the crowd of 11,211 seemed stunned into silence." X-rays indicated leg broken badly in two spots. The injuries forced him to miss the remainder of that season.

When Blake was offered the chance to coach Montreal's American Hockey League / AHL affiliate, the Buffalo Bisons beginning with the 1948-49 season, Blake accepted the challenge and began a second Hockey career that would arguably eclipsed the first. Blake also played 18 games for the Bisons., but although he did a good job with coaching the Bisons, Blake did not see eye to eye with general manager Art Chapman and resigned part-way through the season.

Blake then coached the Valleyfield Braves of the Quebec Senior Hockey League / QSHL in 1949-50, also playing in 46 games for Valleyfield, scoring 12 goals, 16 assists, his last points of a amazing playing career.

Blake then focused on coaching, leading the Braves to the 1951 Alexander Cup championship, as Canadian major senior ice Hockey champions. Blake coached the Braves until the end of the 1953-54 season.

Dick Irvin, the coach of the Canadiens, left to coach the Chicago Black Hawks for the 1955-56 season. Montreal General Manager Frank Selke invited Blake to step behind the Canadiens bench as head coach. Selke had a not-so-hidden agenda. He needed a coach who could handle the explosive temper of Maurice Richard (which had led to a riot the past spring). Blake fit the bill perfectly - coaching experience, playing experience, including being a friend and teammate of Richard's, and he was bilingual. It was a perfect match.

In his first five seasons as Montreal's coach, the Canadiens captured the Stanley Cup - 1956, 1957, 1958, 1959 and 1960.. This unprecedented feat alone could earn Blake a spot in the Hockey Hall of Fame. In thirteen seasons as coach of the Canadiens, his teams finished first nine times and won the Stanley Cup on eight occasions (also 1965, 1966 and 1968). So strong were his teams, in fact, that the NHL adopted a new rule following the 1955-56 season. Montreal's powerplay was comprised of Jean Beliveau at centre flanked by Maurice Richard and Bert Olmstead. Doug Harvey was joined by 'Boom Boom' Geoffrion on the points, and the inimitable Jacques Plante was in goal. The five skaters racked up goals so frequently on the powerplay that the old rule of penalized players serving their entire two-minute minor was commuted to allow the penalized player to return to the ice should a goal be scored by the opposition during his time in the penalty box.

Toe Blake was a stern fixture behind the bench, sporting his trademark fedora hat. Intense, he set the bar high each season he coached. The singular goal was to capture the Stanley Cup. "Toe was the ultimate coach," claimed John Ferguson. "He treated the players like men. He had a great feeling for the game and could mastermind behind the bench in a way nobody has ever been able to."

On May 11, 1968, having just won his eleventh Stanley Cup championship as a player and as a coach, Blake stated, "I've had enough! The pressure is too much!"

He retired at a time when he was on top of his game - and so was his team, which finished that 1967-68 expansion season with a league-best 42-22-10 record, swept the Boston Bruins in four, the Chicago Black Hawks in five and the St. Louis Blues (coached by Bowman) in four.

In 914 regular season games, the Canadiens under Blake won 500 games, tied 159 and lost 255. In 119 playoff games, Blake won 82 times, losing just 37. The Canadiens made the playoffs every season he ran the team, finishing atop the regular season standings nine times and never finishing the year worse than third.

Blake won 8 Stanley Cups - the most championships for any coach in the team's history and second-most in NHL history.

No coach has equalled his 500 regular-season wins with the Canadiens. Notably, he won championships in his first five seasons as a head coach, this streak being an NHL record that stands to this day.

Blake had a .634 winning percentage as a coach, and was a mentor to Scotty Bowman, the only man to win more Stanley Cups as a coach, with nine.

Blake maintained his activity in Hockey through participation on the National Hockey League Rules committee and with Team Canada.

Toe Blake was elected to the Hockey Hall of Fame in 1966 in the player category.