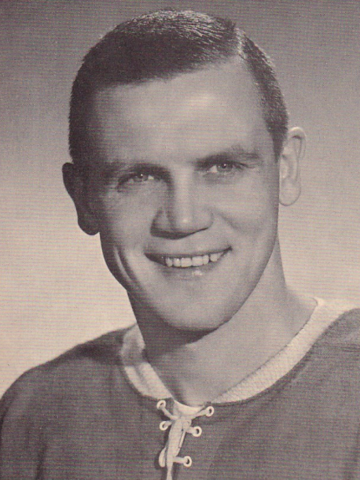 The Canadiens planned to send Backstrom to the Rochester Americans of the AHL for a year of minor pro seasoning, but his performance at training camp was so impressive that the Canadiens brain trust decided to give him a shot at the big league right away. Backstrom rewarded Montreal by scoring 40 points and earning the Calder Trophy. His freshman season was so laudable that he received more than double the votes of runner up Carl Brewer of Toronto. The following year he impressed coach Toe Blake by approaching his sophomore training camp with increased dedication and enthusiasm. His production dropped to 28 points, but he solidified his place as a key defensive forward on the club.

Although Backstrom was overshadowed by Montreal's top two centers, Jean Beliveau and Henri Richard, Backstrom became an important two-way forward on six Stanley Cup-winning teams. He and teammate Claude Provost garnered reputations as two of the most dogged forwards in the game. Even though he often drew checking assignments, Backstrom produced five 20-goal seasons, including a personal high of 27 in 1961-62. Years later, Backstrom reflected on this period: "There were times in my career that I felt I could have played better statistically if I would have played on another team besides the Canadiens. But there was nothing like the team successes that the Canadiens had during the time I played with them."

By the end of the 1960s, Backstrom sensed that he had accomplished all that he could in a Canadiens uniform. Two prolonged scoring slumps underscored his frustration. One in fact lasted 20 games in 1968-69. A high point occurred on April 10, 1969, when he scored the first overtime winner of his career in the opening game of the semifinals against Boston.

During the 1970 off-season, it became apparent that Backstrom wanted a change of scenery, preferably on the West Coast. The thought of returning to Montreal as a role player was so discouraging to him that he notified the team that he'd likely retire. Backstrom had a change of heart and reported for training camp but his uncertainty remained and came to a head when he left the Canadiens on the eve of their 1970-71 season opener. He eventually returned to the team but was used sparingly.

Backstrom received his requested move when he was involved in a notorious transaction between Montreal and the Los Angeles Kings. In May 1970 Canadiens general manager Sam Pollock acquired the Oakland Seals' first-round pick with the hope that they'd finish last overall and give him a chance to draft junior star Guy Lafleur. Halfway through the 1970-71 season, it was clear that the L.A. Kings were having a sufficiently bad season to challenge for the first pick in the draft. Consequently, Backstrom was sent west in a move that gave him a new lease on life and boosted the Kings in the NHL standings.

In February 1973 he was traded to the Chicago Black Hawks for Dan Maloney and finished the season there.

Backstrom then jumped to the World Hockey Association and joined the Chicago Cougars, where he played for two years, and later became a part-owner of the team. In his first season, he led the Cougars in scoring with 33 goals and 83 points in 70 games, and won the Paul 1974 Deneau Trophy as the WHA's most gentlemanly player.

Backstrom was invited to join the WHA All-Star Team that was being assembled to represent Canada in the 1974 Summit Series against the Soviet Union National Hockey Team. Skating on a line with Gordie and Mark Howe, Backstrom performed superbly and was one of the top forwards in the competition with eight points in 8 games.

Backstrom's offensive production dropped sharply in 1974-75 and at the end of the season the new Denver Spurs selected Backstrom in the WHA's expansion draft. Backstrom was the team's top scorer, but the franchise struggled, and a move to Ottawa—where the team was renamed the Ottawa Civics—did not help. The franchise ceased operations 41 games into the season. Backstrom finished the season with the New England Whalers, scoring 35 goals and 83 points over the year. He played one more year with New England, a 48-point effort and retired in 1977.

Immediately after his retirement Backstrom accepted an offer to join the staff of newly appointed University of Denver Pioneers head coach, Marshall Johnston, as an assistant. Three years later Backstrom returned to the NHL as an assistant for the Los Angeles Kings but only stayed for one season before rejoining Denver, this time as the bench boss after Johnston left to pursue opportunities in the NHL.

Backstrom led the Pioneers through a few lean years in the early 1980s before having a breakout season in 1985–86 when he led Denver to still-team record 34-win season including a conference regular season title, a conference tournament title (their first in 13 years) and reached the teams first Frozen Four since finishing second in 1973. Backstrom earned both the conference and national coach of the year awards for the impressive season, but he was unable to sustain the high level of play for the remainder of his tenure. Backstrom resigned after the 1989–90 season, turning the team over to Frank Serratore.

Backstrom jumped into the professional ranks in 1990–91 when he took over the Phoenix Roadrunners of the International Hockey League. After a good first season including pushing the #1 seeded Peoria Rivermen to a seventh game in the Turner Cup semifinals, Phoenix dropped to dead last in the 10-team league and Backstrom was dropped as the coach.

Backstrom, along with Dennis Murphy and Larry King, founded Roller Hockey International and served as commissioner for a time but it soon became apparent that the league was in financial trouble and it suspended the entire 1998 season before playing one final campaign in 1999. While the league didn't officially disband until 2001.

Backstrom meanwhile returned to the NHL in 1999–00 as a scout for the St. Louis Blues. After three seasons with the blue notes Backstrom founded a new CHL team called the Colorado Eagles. In addition to owning the team, Backstrom served as General Manager and President of the team for the first three seasons, including a league title in 2004–05. With Backstrom as owner, the Eagles finished atop their division six times, made the finals five times, and win the Ray Miron President's Cup twice in eight seasons before making a move to the ECHL, a higher profile league, in 2011–12.