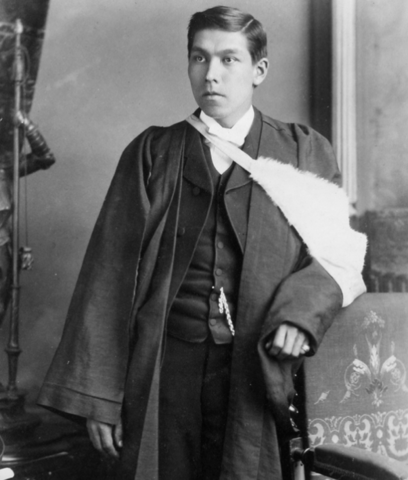 Thomas Daniel Green was educated at the Mohawk Institute Residential School in Brantford, Ontario. A gifted student, his college tuition was mostly paid for by the Church of England’s missionary society and the Six Nations Council financially supported his education too.

He attended and graduated from McGill College (McGill University) with a Bachelor of Applied Science / BAppSc in the class of 1882. While at McGill, he tutored other students to help raise money for his college education and other expenses.

NOTE - In Indigenous McGill, published 2019, it states that between the 1870s and the end of the First World War, at least four exceptional Indigenous students graduated from McGill, with Thomas Daniel Green listed as one of the four.

Green was a member of the McGill Hockey Club, and his name T.D. Green is engraved on the oldest known ice Hockey trophy in the world. The Montreal Winter Carnival was held from January 23 to 28, 1883 on the St. Lawrence River, Crystal Rink and the Victoria Skating Rink. The Trophy for this tournament, Winter Carnival Cup is at the McCord Museum in Montreal, and is engraved with - Winter Carnival 1883 HockeyMatch on one side and on the other side Won by McGill University Hockey Club - J.A. Kinloch, Captain, A.P. Low, J.M. Elder, T.D. Green, P.L. Foster, R.F. Smith, W.T. Murray.

After completing his studies in Montreal, he moved to Ottawa, Ontario seeking work with the Canadian federal government. In Ottawa, he joined the Ottawa Hockey Club in time to play in their first competitive season of 1883–1884. At the 1884 Montreal Winter Carnival, the Ottawa Hockey Club was the first team from outside Montreal that played in the tournament. For this tournament, the location changed to a rink made on the McGill University grounds.

On December 8th, 1886, Green was elected as the 1st President of the Amateur Hockey Association of Canada / AHAC, considered the first organized ice Hockey league in the world.

Biography from http://www.landsurveyinghistory.ab.ca
Born December 21st, 1857, near where Alford now is, five miles from Brantford, Ontario, and was a son of Daniel Green and his wife, Mary Crawford. His grandfather was Peter Green and his grandmother was Mary John. His ancestors came originally from Green Bay, in Wisconsin, and his mother was a daughter of Peter Crawford, the Indian Missionary, who settled near Caledonia.
His only surviving relatives were Daniel Thomas Green, on R.R.4, Paris, Ont., who assisted with this biography, and Lloyd C. Green, who were nephews, and Edith S. White and Nettie V. Doctor, who were nieces, living in or near Brantford, Ont.

Daniel was educated at the Brantford High School, and by teaching to finance himself, graduated from McGill as B.Sc. in the class of 1880. In November 1882. he passed his preliminary DLS examination, and in May 1884, his final DLS examination. On the January 7th, 1885, when his address was Ottawa, he was appointed an OLS by the DLS road. And finally became an Alberta Land Surveyor.

After his graduation, Sir John A. Macdonald took a deep interest in him, and for a time during the Macdonald regime and while the Marquis of Lansdowne was Governor-General of Canada, he was employed by the Department of the Interior. He is described as versatile, traveller, raconteur, with a splendid command of the English language, and he was a personal friend of the Hon. A.C. Rutherford, who was the first Premier of Alberta.

He married Mary Catharine Plumb, an accomplished lady of Prescott, Ontario She died in June, 1935, leaving no children, but two sisters, one Miss E.A. Plumb, then residing in Prescott, and Mrs. C.S. Anderson, then of 68 5th Avenue, Ottawa, widow of the late Rev. Canon Anderson.

In 1886 he was employed as a DLS surveying old trails near Fort Ellice and Moosemin, Manitoba, when his address was Brantford.

In 1887, surveying old trails in the Calgary district, namely, MacLeod to the Blackfoot crossing, along the Bow River.

In 1888 at the same class of work along the Bow River, when his address was Ottawa. In 1891 to May 2nd, 1893, he was assistant surveyor in the Department of Indian Affairs.

In 1907 he toured Europe for six months.

In 1908 he surveyed mining claims in the Brazeau district west of the Rockies.

When the Calgary-Edmonton Railway was built, he subdivided the site of Rocky Mountain House, and in 1910 he homesteaded three miles south of that village, and carried on surveying.

On November 29th, 1935, as he had lost his wife, he was bidding good-bye to his Rocky Mountain House friends pre­paratory to entraining for Edmonton and BC for the winter, but dropped dead in the hallway of his hotel.

His remains were taken to Edmonton, where he was buried beside his wife in Edmonton Cemetery, thus ending a varied, busy and colourful life.

Sourced from Image from @mcgillu.