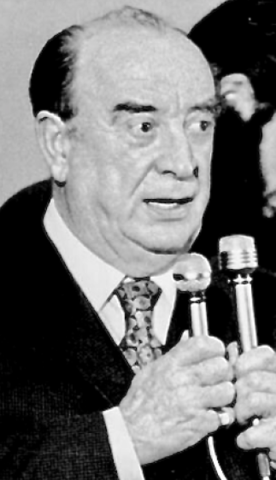 Ahearne was the secretary of the British Ice Hockey Association / BIHA from 1934 to 1971, and served as the association's president from 1971 to 1982. During this time he was also the United Kingdom's delegate to meetings of the International Ice Hockey Federation / IIHF.

Ahearne was the head coach of the Great Britain ice Hockey team which won a bronze medal at the 1935 Ice Hockey World Championships. He continued working on the business management of the team for another three years, and appointed Percy Nicklin to take over the coaching duties.

Prior to Ahearne's involvement in the national team, it was composed of current and former army officers. He decreed that the national team needed to play at least four British-born players, and augmented the roster with imports. He built a powerful British team by recruiting players living in Canada who obtained British citizenship under the British nationality law, through ancestral linkages to the United Kingdom.

Ahearne went to Canada in 1935 with British team captain Carl Erhardt to find the best available players. The Canadian Amateur Hockey Association / CAHA reluctantly agreed to allow permission for any player wishing to transfer, as long as the BIHA would only use such players who were properly transferred.

The combined efforts of Ahearne, Nicklin and Erhardt, helped Great Britain win the gold medal in ice Hockey at the 1936 Winter Olympics in Garmisch-Partenkirchen, which also determined the 1936 European Championship and the 1936 World Championship.

Ahearne was part of the IIHF delegation who travelled to North American in 1947, to convince the CAHA, and the Amateur Hockey Association of the United States / AHAUS to resume being active members. He later welcomed the Soviet Union Ice Hockey Federation to IIHF membership in 1952. He served as vice-president of the IIHF from 1951 to 1957, then as president from 1957 to 1960, then as vice-president again from 1960 to 1963, returned to the presidency from 1963 to 1966, returned to vice-presidency from 1966 to 1969, and then president again from 1969 to 1975. The alternating terms as president and vice-president arose from the agreement where the CAHA and AHAUS rejoined the IIHF with the promise of rotating the top position between Europe and North America. The other IIHF presidents during that time were Robert Lebel from Canada (1960 to 1963), and William Thayer Tutt from the United States (1966 to 1969).

During his time with the IIHF, Ahearne is credited with improving its finances, cooperating with the International Olympic Committee / IOC, and helping to develop and introduce ice Hockey to new countries. He also transformed the Ice Hockey World Championships into a well-known annual tournament, and implemented the splitting of the event into different tiers of competition. He also oversaw the foundation of both the IIHF European Junior Championships and the Izvestia Cup in 1967. He introduced advertisements on the side boards of Hockey rinks during the World Championships, and secured broadcasting rights for international matches. He is also credited for redistributing funds and profit sharing from these events to IIHF members for development.

In 1969, the IIHF voted to allow limited use of former professional players at international competitions. The decision was later challenged by the Soviet Union, claiming that Canada would abuse the change at the upcoming 1970 World Ice Hockey Championships. When the IOC did not support the change, Ahearne was caught in the middle and later changed his position. The CAHA responded by withdrawing from international play until 1977. This dispute led to the negotiation of the 1972 Summit Series, of which Ahearne was one of the four signatories who approved the event on 18 April 1972, along with Fred Page, Joe Kryczka, and Andrey Starovoytov.

Bunny Ahearne was the namesake of the Ahearne Cup that began in 1952 in Sweden.

Bunny Ahearne was inducted into the Hockey Hall of Fame in 1977.

Bunny Ahearne was inducted into the British Ice Hockey Hall of Fame in 1987.

Bunny Ahearne was posthumously inducted into IIHF Hall of Fame in 1997.