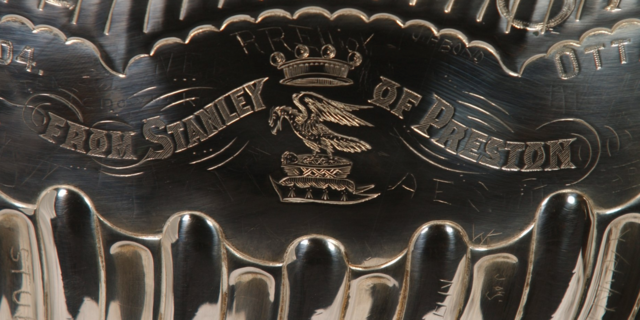 These were the First Engravings on the Stanley Cup, engraved and sold by London silversmith G. R. Collis and Company in London, England in 1892 and the Cup / Punch Bowl / Rose Bowl was made in Sheffield, England.

The crest of the Stanleys, Earls of Derby is depicted.
It is told in a well-known legend - "On a chapeau gules, turned up ermine, an eagle, wings extended or, preying on an infant in its cradle proper, swaddled gules, the cradle laced gules"

This crest is that of the Lathoms, now represented by the Stanleys, and is said to have been assumed on account of one of their ancestors having abandoned and exposed an illegitimate son in an eagle’s nest, and the eagle having nurtured and fed him. From this extraordinary circumstance, his father was induced to take him again and to adopt him as his heir.

The story of The Eagle and Child is a traditional tale going back to the time of King Alfred. In the Lathom family it is told as follows:
‘Sir Thomas Lathom had one child, Isabel and was anxious to have a son and heir to carry the family name. His wife being of advanced years, Sir Thomas turned to a young gentlewoman who obliged him with a son. The child was brought by a servant to the foot of a tree in which an eagle nested. Sir Thomas and his lady on their usual walk found the child as if by accident. The old lady believed the child to be a gift from heaven, brought by the eagle and the child was adopted as their heir. The child was given the name Oskatell after his mother Mary Oskatell. The Eagle and Child was then adopted as the family crest. On his death-bed Sir Thomas had a change of heart and left the bulk of his fortune to Isabel, now the wife of Sir John Stanley.’

If there is any truth in the story, then it is likely that the Sir Thomas Lathom concerned was Isabel’s father’s eldest son, also Sir Thomas Lathom who died in 1383, leaving an only daughter, Ellen, who died without issue in 1390. Her two uncles had predeceased her, thus making her aunt, Isabel, the heir. If Ellen’s father had a natural son who was claiming part of the estate, it might explain the delay from 1390 to 1406, when Lathom and Knowsley were granted to Sir John Stanley in his wife’s right. It was then said that Sir John adopted for his crest an eagle looking down on the child as if it was about to devour him, in order to emphasize the triumph of the legitimate heiress.