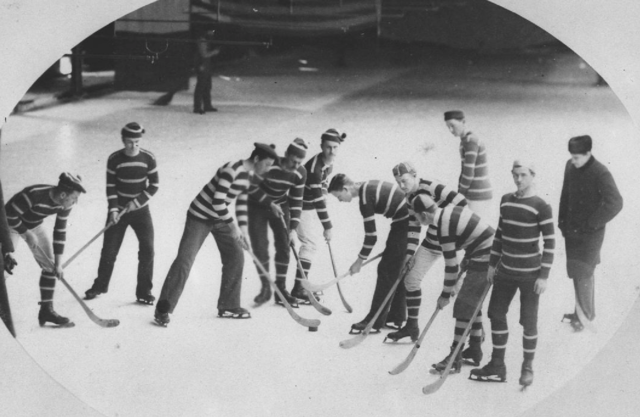 Students from the Montreal-based university were instrumental in the origins and development of Ice Hockey. They founded the world’s first organized Ice Hockey club and played their first game on Jan. 31, 1877, according to an article published in the Feb. 1, 1877 edition of the now defunct McGill University Gazette.

That first contest was a challenge game played between McGill and the “Victorias” – an amalgamation of members of Montreal’s old Victoria Skating Rink, bolstered with players from the Montreal Lacrosse Club and the Montreal Football Club. The historic game, which ended in a 2-1 victory for McGill, was played at the Victoria Rink, bordered by Drummond Street, Boulevard de Maisonneuve and Dorchester Street (now Boulevard René Levesque).

The Crystal Palace was an exhibition hall built for the Montreal Industrial Exhibition of 1860, originally located at the foot of Victoria Street (one block west of today's Robert-Bourassa Boulevard) between Sainte-Catherine and Cathcart Streets, then relocated to Fletcher's Field. It was used for temporary exhibitions, and in winter, housed an ice skating rink.

In 1878 it was dismantled and moved to Fletcher's Field in Montreal's Plateau Mont-Royal borough and situated along Park Avenue, opposite Mount Royal, and just south of Mount Royal Avenue. In July 1896, the Crystal Palace was destroyed by fire

The large open space of the exhibition hall was suitable for other uses. In later years, the hall would house a natural ice skating rink in the winter, and was one of the first indoor skating rinks in Canada. The skating rink was used by McGill University students to play ice hockey and the rink is the site of the first known photograph of ice hockey players in hockey uniforms, taken in 1881.