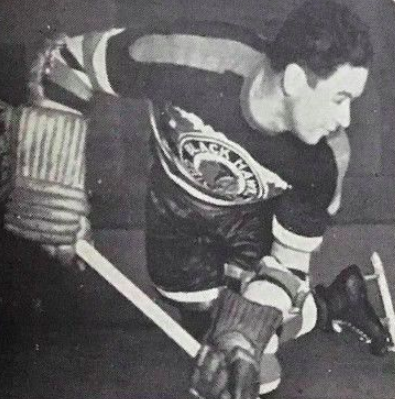 Thompson learned to play Hockey in his hometown of Calgary, and would play his junior Hockey with the Calgary Canadians of the Calgary City Junior Hockey League, helping them win the 1926 Abbott Cup and the 1926 Memorial Cup championship.

Thompson would then score in each game of the Memorial Cup, which would end up being a 3 game series vs the Queen's University Queens, and in the third and final game, Thompson was again the outstanding player on the ice, being responsible for two of his team's goals, in a 3-2 victory. Thompson scored the game's first and third goals, the latter standing up as the game, and Memorial Cup championship-winning goal.

Thompson was then signed as a free agent by the New York Rangers, October 12, 1926, and started his NHL career in the 1926-27 season. The NHL was a different game for Thompson, as he scored just 7 goals, 3 assists in his first season there, but was known a as well-rounded player who could check and get scoring chances.

Thompson played in New York for 5 seasons, and helped the Rangers win their first Stanley Cup championship in 1928. Thompson would score 38 goals, 35 assists as a Ranger during his career in New York.

Thompson was traded to the Chicago Black Hawks for Art Somers and Vic Desjardins, September 27, 1931, and would have his finest years as a pro playing in Chicago.

Thompson hit the 20-goal mark twice during his eight years with the Black Hawks. In the 1933-34 season, he formed an effective line with Doc Romnes and Mush March when Chicago won its first Stanley Cup in 1934, and Thompson led the team in goals and points during the regular season.

Thompson retired during the 1938-39 season to take over the head coaching role for the Black Hawks from Bill Stewart for the last 27 games of the schedule. Thompson ended up staying behind the Black Hawks bench on a full-time basis through the end of the 1943-44. He guided the club to a 104-127-41 record, and a Stanley Cup finals appearance in 1944.

Thompson also coached the Vancouver Canucks from 1945 to 1947 in the Pacific Coast Hockey League / PCHL. The 1945-46 Canucks finished first in the four team North Division and first overall in the nine team PCHL. It should be noted that the teams in the North played 58 games each while the teams in the South played just 40 games each. The Canucks would win the Presidents Trophy (Lester Patrick Cup), as PCHL playoff champions defeating the Hollywood Wolves in 1946.