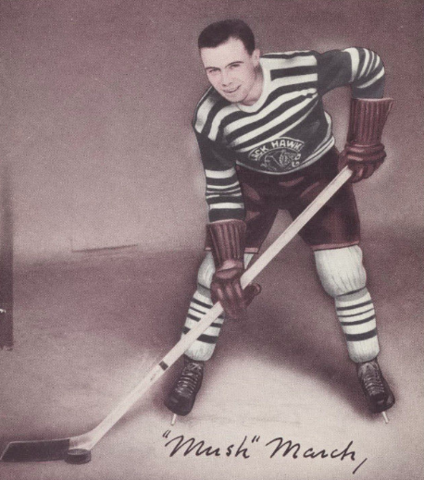 His nickname was derived from the character "Mush Mouth" from the comic strip Dick Tracy.

Mush began his junior Hockey with the Regina Falcons in 1925, playing with the Falcons until 1927, when he joined the Regina Monarchs, helping the Monarchs win the 1928 Memorial Cup championship. Mush scored a incredible 36 goals in 11 playoff games, and in the 3 game championship series vs the Ottawa Gunners, Mush scored all 4 goals in a game 1 victory 4-3, 1 goal in game 2 loss 2-1 and 2 goals in game 3, a 7-1 victory.

Mush was signed by the Chicago Black Hawks as a free agent on November 29, 1928 and made the jump from junior Hockey to the NHL, a rare feat in those days. The Black Hawks played at the Chicago Coliseum during his first season, where he scored 3 goals, 3 assists in 35 games.

The Black Hawks moved into the new Chicago Stadium for the 1929-30, and it was the largest indoor arena in the world at the time.

Mush scored the 1st NHL goal in Maple Leaf Gardens on November 12, 1931. He scored the goal on Lorne Chabot at the 10:15 mark of the 1st period. Chicago defeated the Maple Leafs 2-1.
The ceremonial first face-off was between Toronto’s Red Horner and Chicago’s Mush March.

Mush is most remembered for scoring the game-winning goal in the second overtime of Game Four of the 1934 Stanley Cup Finals vs the Detroit Red Wings on April 10, 1934. Mush scored the goal on Wilf Cude at 10:05 of the 5th period at the Chicago Stadium. The Chicago Black Hawks won he series 3-1.

Mush became the first recorded player in Ice Hockey history to win the Stanley Cup for his team on an overtime goal.

Mush had also scored a overtime goal vs the Montreal Canadiens in game 2 of the first round, eliminating the Canadiens on March 25, 1934.

Mush and the Black Hawks also won the 1938 Stanley Cup championship, defeating the Maple Leafs 3 games to 1 in the final. Mush scored 2 goals in the playoffs, including the final goal of the playoffs on Maple Leafs goalie Turk Broda in the 3rd period of game 4.

Mush became a NHL referee after retiring, working the game for 11 seasons, while also refereeing some American University Hockey too.

Harold ‘Mush’ March was inducted into the Saskatchewan Sports Hall of Fame in 1988.