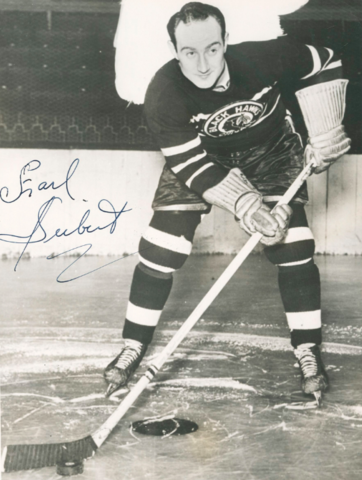 Earl Seibert played 2 years of junior Hockey with the Kitchener Greenshirts in his hometown of Kitchener (Berlin) from 1927 to 1929, and turned pro for the 1929-30 season with the Springfield Indians of the Can-Am league. During his two-year term in Springfield, he suffered a serious concussion and for the rest of his career wore a helmet, making him the first player to wear headgear on a regular basis.

Seibert joined the New York Rangers in May 1931, playing with Ching Johnson as his linemate. He played 5 seasons there, scoring 30 goals and 43 assists in 221 games including playoffs, where he helped the Rangers win the 1933 Stanley Cup.

Siebert was a very serious player both on and off the ice. He was a tough negotiator in contract talks, and during his second NHL season, Seibert enlisted his father Oliver Seibert as his agent in some acrimonious negotiations with the Rangers. While a contract was negotiated, New York tired of his haggling and he was later traded to the Chicago Black Hawks for Art Coulter in January 1935.

Seibert then established himself as one of the best defensemen in the NHL of his era. He was named to the First or Second All-Star Team each year between 1935 and 1944 (4 times to the first, 6 times to the second), a feat surpassed only by Gordie Howe, Maurice Richard, Bobby Hull and Doug Harvey.

In 1938 he helped the improbable Black Hawks to the Stanley Cup championship, defeating the Toronto Maple Leafs in 4 games. Seibert scored 5 goals, 2 assists in 10 playoff games, while playing his tough rugged style on defence. Siebert was also moved up to play forward for the finals, scoring 1 goal, 1 assist. Chicago had not been expected to win the championship, and the NHL did not send the Stanley Cup to game 4 of the finals, so when the Black Hawks won the series 3 to 1 in games, there was no trophy to celebrate with.

Seibert was such a favourite with the team's owner, Major Frederic McLaughlin, that he was given part ownership of the team. However, when McLaughlin died, manager Bill Tobin refused to acknowledge this gesture and instead traded Seibert to the Detroit Red Wings half way through the 1944-45 season.

He played just 43 games over a season and a half in Detroit, while also playing 43 games for the Indianapolis Capitals of the AHL before he retired in early 1947.

Seibert then turned to coaching the Springfield Indians, the team he'd begun his career with. He coached the Indians from 1947 to 1951.

Earl Seibert was ranked number 72 on The Hockey News' list of the 100 Greatest Hockey Players.