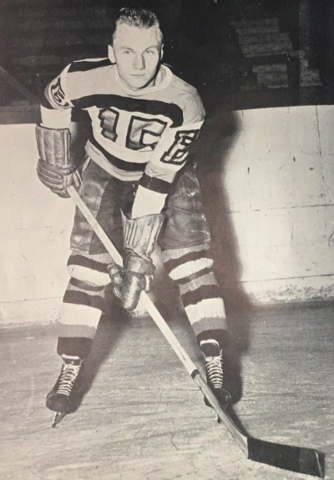 Smith played all his early Hockey in Saskatchewan, and also his first year of junior Hockey with the Regina Pats in 1940.

Smith then joined the powerful OHA Oshawa Generals for the 1941-42 season, who were coached by Charlie Conacher. The Generals had just recently won the 1939 & 1940 Memorial Cup championships, and were looking to win more. Smith fit into the team just fine, becoming the team scoring champion in his second year there. The Generals went to 3 straight Memorial Cup finals with Smith in their line-up, losing in 1942 and 1943, and winning the 1944 Memorial Cup championship (along with 3 George Richardson Memorial Trophy championships). Smith scored 14 goals and 13 assists during the 1944 Memorial Cup tournament, and was the leading scorer. In the best of 7 finals, Smith scored in every game vs the Trail Smoke Eaters in a 4 game sweep - 3 goals in game 1, 1 goal game 2, 3 goals in game 3 and 3 goals in game 4, along with 8 assists in the 4 games. The Memorial Cup-winning goal went to Smith. His goal at 4:46 of the third period put Oshawa out front 5-3.

Smith, a 5'7" 150lb left winger was signed by the Boston Bruins, and with many of the Bruins players still at WWII, Smith jumped right from junior Hockey into the NHL. He had a very good 1944-45 rookie season, scoring 20 goals, 14 assist in 49 regular season games and 3 goals, 4 assists in 7 playoff games with the Bruins, who lost to the Detroit Red Wings in 7 games.

Smith was second in voting to Toronto goalie Frank McCool for the Calder Memorial Trophy as NHL rookie of the year in 1945.

The Bruins had many of their players return from the war to start the 1945-46 season, and smith played only 23 games for the Bruins, while also playing for their farm team, the Hershey Bears during the season.

Over the next four seasons Smith was a regular with the Bruins, playing in 237 consecutive games, and played mostly with Johnny Peirson & Paul Ronty called "the muscle line". He returned to the 20 goal mark once and performed well n the playoffs too, but was traded to the Toronto Maple Leafs with Fern Flaman, Phil Maloney and Leo Boivin for Bill Ezinicki and Vic Lynn, November 16, 1950. Smith never played for the Maple Leafs. In fact he never played another game in the NHL.

After retiring, Kenny, his wife Dottie and their son Ken Jr., established Kenny Smith Sporting Goods which was later known as The Sharp Edge in Mount Joy, Pennsylvania, dealing with all things Hockey. Ken would continue his love of the sport through the Bruins Alumni Association and as owner and coach of the Hershey Jr. Icers in the mid 1970s.