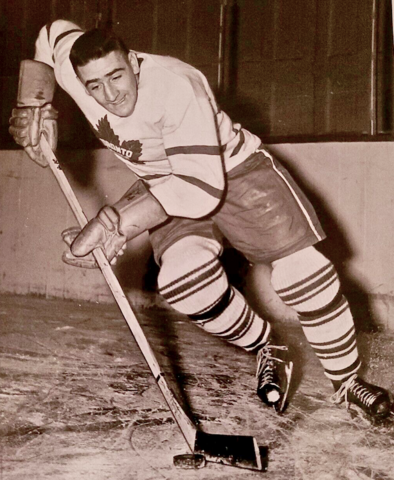 Smith then signed as a free agent with the Quebec Aces on October 15, 1946, playing just 15 games in the Quebec Senior Hockey League / QSHL to start the season before the Toronto Maple Leafs signed him to his first pro contract on December 8, 1946, playing 14 games during the remainder of the season for the Maple Leafs, debuting on February 6, 1947 vs Montreal Canadiens at The Forum in a 8-2 Montreal win. He scored his 1st NHL goal vs Frank Brimsek of the Boston Bruins on February 8, 1947 at Maple Leafs Gardens at 15:43 of the 3rd period in a 5-2 Toronto win.

Smith started the 1947-48 season with Pittsburgh Hornets of the American Hockey League / AHL, the Maple Leafs farm team, but would be called up to Toronto early in 1948, playing the final 31 games for the Maple Leafs and 2 playoffs games, as the Maple Leafs won the 1948 Stanley Cup championship. The Maple Leafs also won their 1st Prince of Wales Trophy as NHL regular season champions 1947-48.

After retiring, Smith became a player-coach with the Whitby Dunlops, a senior team in the Ontario Hockey Association. The Dunlops would win a gold medal at the World Ice Hockey Championships in 1958 at Oslo, Norway representing Canada, with Smith scoring 9 goals, 5 assists in the tournament.

Smith and the Dunlops would also win the J. Ross Robertson Cup and the Allan Cup in 1959, with Smith scoring 19 goals, 12 assists during their playoffs.