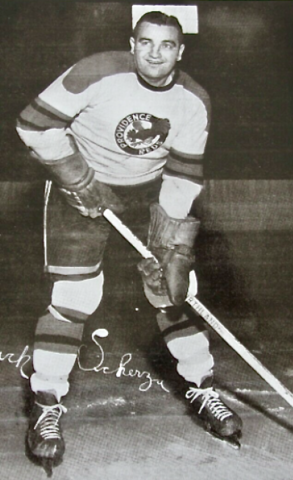 Scherza then turned pro with the NHL Boston Bruins for the 1943-44 season, making his NHL debut on October 30, 1943 vs Montreal Canadiens at the Montreal Forum, where he also scored his 1st NHL goal vs Bill Durnan. He played on the so-called "Sprout Line" with fellow youngsters Don Gallinger and Bep Guidolin, but only had 1 assist and that 1 goal in 9 games before the Bruins traded him to the New York Rangers for cash, November, 1943.