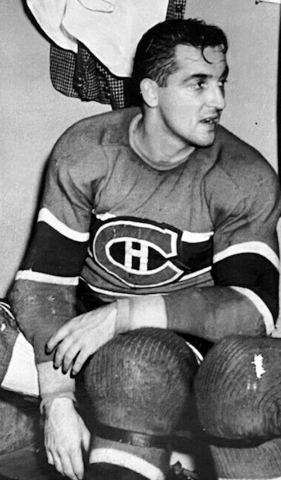 Lamoureux had moved to Windsor by the time he enrolled in high school. He attended Windsor-Walkerville Technical, where he developed a reputation as a fine all-around athlete. He began to play Senior Hockey with the Windsor Mic Macs at the tender age of 15.

Lamoureux turned pro in 1937-38 with the Windsor Chryslers of the Michigan-Ontario Hockey League / MOHL, averaging nearly a point per game in the 1937-38 season.

Lamoureux then spent the 1938-39 season in Great Britain with the Earls Court Rangers of the British National League, scoring a staggering 23 points in 9 games.

Lamoureux came back to Canada to play two seasons of QSHL and OHL Senior Hockey with the Hamilton Dofascos before finally reaching the NHL.

Lamoureux played one game for the Montreal Canadiens in 1941-42, during which he spent most of his time with the AHL’s Washington Lions. He spent the entirety of the next five years with the Canadiens, winning Stanley Cups in 1944 and and 1946.

Lamoureux also won the Prince of Wales Trophy, awarded to the team with the NHL best regular season record, in four of his five years in Montreal - 1944, 45, 46 and 1947.

A masterful playmaker, adept at turning the action back on his opponents with precise outlet passing and puck-carrying ability, Lamoureaux amassed 23 assists and scored eight times, both career highs, in 1943-44 as his team dropped only a handful of games on their way to the 1944 Stanley Cup championship.

Following up a 22 assist effort in 1944-45, Lamoureaux’s name was engraved on the Stanley Cup for a second time after Montreal’s championship run in 1946.

Over the course of his NHL career, Lamoureux scored 19 goals and added 79 assists for 98 points in 235 regular season games.

Lamoureux then played for Buffalo-Springfield in the AHL, Shawinigan Falls Cataracts in the QSHL, Detroit Hettche in the IHL, and the Charlottetown Islanders in the MMHL. He retired in 1953 following a final eight-game season with the North Bay Trappers of the NOHA. Lamoureux briefly came out of retirement for the 1955-56 season to play 24 games with the IHL’s Indianapolis Chiefs and 5 games in 1959 with the AHL Cleveland Barons.

Lamoureux turned to coaching after his playing days. He had already been a playing/coach with the Shawinigan Falls Cataracts for 2 seasons from 1948 to 1950, and he returned to coaching in 1955 with the Indianapolis Chiefs of the International Hockey League / IHL, leading the Chiefs to the 1958 Turner Cup championship

Lamoureux passed away mid-season while coaching the Chiefs. He had to leave the bench in November as a case of acute hepatitis hospitalized him. He died on January 11th, 1961. He was just 45 years old.

In memoriam, the IHL created the Leo Lamoureux Trophy to be handed out to that league's leading scorer.

Leo Lamoureux was inducted into the Windsor / Essex County Sports Hall of Fame in 1990.