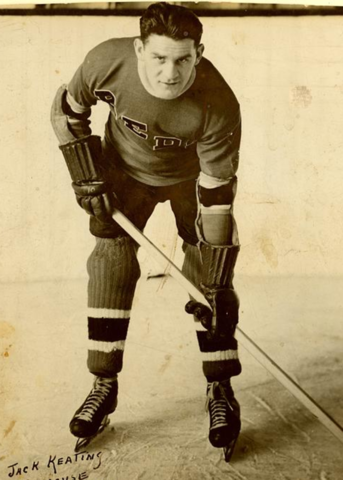 Keating played his early Hockey in Miramichi, and was a star player on the Harkins High School Hockey team in the mid 1920s.

Keating played for the Chatham Ironmen for the 1925-26 season, starring on both their Hockey and baseball teams.

Keating then went to play for the Saint John Fusiliers from 1926 to 1929, and helped them win the 1928 Southern New Brunswick Senior Hockey League championship.

Keating then played for the Saint John Beavers during the1929-30 season, and by now was described as one of the best Hockey players in the Maritimes, and had a nickname - "The Miramichi Flash"

In the summer of 1930, Keating received a letter in the mail with a train ticket to Galt, Ontario. The NHL New York Americans were having their tryout camp there, and they wanted Keating to attend. Keating packed is bags immediately and left Saint John.

Keating impressed the Americans with his speed and tenacious play, and was offered a contract by couch / manager Eddie Gerard for $2,500 to sign with the Americans, and a bonus should he make the NHL team. Keating then told Gerard that he had a service station back home and was making pretty good money there pumping gas, and told Gerard he would think about the Americans offer. A few days later, Gerard called Keating into his office again, and offered him $3,000 plus the bonus. Keating countered with 3,500 if he was assigned to their farm team, and $5,000 if he played for the Americans, and on October 22, 1930 Gerard signed Keating to his first professional contract.

Keating played his first professional season with the New Haven Eagles of the Canadian American Hockey League / Can-Am in 1930-31, scoring 9 goals in 39 games. The feisty winger also picked up 49 minutes in penalties.

The Americans then lent Keating to the International Hockey League Buffalo Bisons for the 1933-34 season, and then traded Keating to the Providence Reds on November 13, 1934. Keating would spend the next 5 seasons playing for the Reds, helping them win the 1938 Calder Cup championship with player / coach Fred "Bun" Cook.

After the war WW2 ended, Keating then became the coach of the resurrected Saint John Beavers. Many of the players had served in the war, and had wanted to get back playing Hockey. There was no league at the time in Saint John, so the Beavers played exhibition games. In the spring of 1946, the Beavers entered the Provincial playoffs, making it to the finals where they defeated the Moncton Maroons. The Beavers now were in the Hockey championship for the Maritime Provinces, and faced the powerful Halifax Navy team for the championship. The series needed 5 games to declare a champion, with the final 3 games played in Halifax. The Saint John Beavers would be crowned Maritime Hockey Champions with a 5 to 3 victory, and return to Saint John as hero's with the coveted Starr Shield as Maritime Provinces Hockey Champions.

Keating would coach the Beavers until 1949.

Jackie Keating was inducted into the New Brunswick Sports Hall of Fame in 1973.

Jackie Keating was inducted into the Saint John Sports Hall of Fame in 1990.