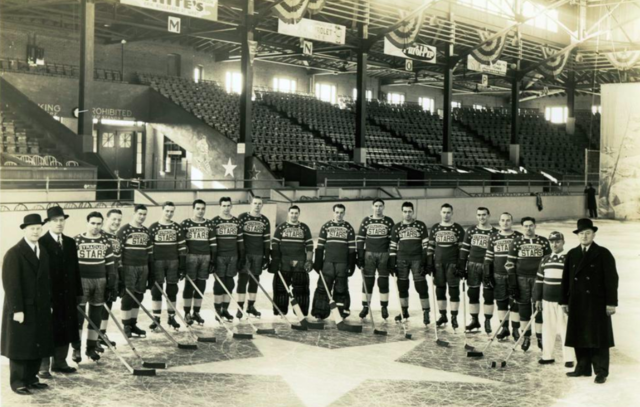 Syracuse Stars finished the regular season 27-16-5 and finished in first place in the Western Division, 12 points ahead of the Pittsburgh Hornets. The Stars then defeated the Hornets in the division final, 3 games to 2, to advance to the first ever Calder Cup championship final vs the Philadelphia Ramblers.

After splitting the first two games, the Stars won Game 3, 4-1, in Philadelphia, setting up a chance to win the championship at the New York State Fairgrounds' Coliseum.

The Syracuse Stars won the I-AHL's first championship (Calder Cup) on April 11, 1937 after a three-games-to-one victory over the Philadelphia Ramblers.

The Syracuse Herald reported a "throng of 6,200 fans saw Syracuse outplay the Ramblers from start to finish to take the title."

The game was not only the most attended game of the playoffs in any city, it also set a new attendance record for Syracuse.

Norman Mann scored the championship winning goal in the 2nd period, as the Stars won the final game 5 to 0.

The Syracuse Stars won the championship, but there was no trophy (Calder Cup) to celebrate with.