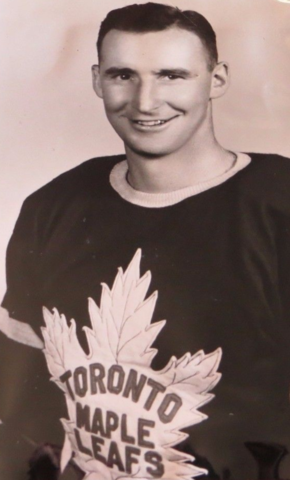 Heron played junior with the local Toronto Marlboros, Toronto Native Sons and West Toronto Nationals. He then played senior with the Toronto Goodyears and led the OHA in scoring in 1936 and 1938.

The young forward played six games with the Toronto Maple Leafs in 1938-39 but gained most his experience that year with the Syracuse Stars of the AHL. The next season Heron scored 11 goals playing with Gus Marker and Pete Langelle and helped the Maple Leafs reach the finals where they lost to the New York Rangers in six games.

During the 1940-41 season Heron continued as a solid checker and contributed nine goals but the Maple Leafs were knocked out in the semifinals. The following October there was no longer room for him on the deep Toronto roster so he was loaned to the Brooklyn Americans along with Marker and Nick Knott for Lorne Carr. After 11 games the Americans loaned him to the Montreal Canadiens for a month before he was relegated to the AHL Pittsburgh Hornets.

After playing three years of senior Hockey with the Toronto Research Colonels, Toronto Staffords, Toronto RCAF and the Rockliffe RCAF, Heron joined the Toronto Barkers, where he finished his career in 1949