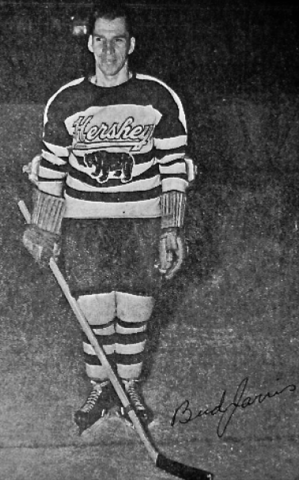 Jarvis then turned pro, signing with the Pittsburgh Pirates of the National Hockey League / NHL for the 1929-30 season. He made his NHL debut on November 16, 1929 vs the Montreal Maroons, and scored his 1st NHL goal on November 21st vs John Ross Roach of the New York Rangers.

Jarvis was then transferred to the NHL Philadelphia Quakers after the Pittsburgh franchise relocated for the 1930-31 season. Jarvis scored twice in the last game the Quakers played, a memorable 4-4 overtime tie with the Canadiens in Montreal on March 21, 1931.

He was then claimed by the New York Rangers from Philadelphia in Dispersal Draft on September 26, 1931, and played the 1931-32 season with the Springfield Indians in the Canadian-American Hockey League / Can-Am.

Jarvis then joined the Buffalo Bisons of the International Hockey League / IHL, helping them win the 1932 IHL championship. He played in Buffalo until 1936, when he was signed as a free agent by the Toronto Maple Leafs after Buffalo (IAHL) franchise folded.

Jarvis played 24 games for the Maple Leafs, scoring just 1 goal, and finished the 1936-37 season with the Syracuse Stars of the International-American Hockey League / IAHL, helping them win the 1937 (Calder Cup) league championship.

Jarvis then played for the IAHL Providence Reds for the next 3 seasons, helping them win the 1938 (Calder Cup) league championship in his first year with the Reds.

Jarvis was traded to the Hershey Bears by Providence for Clarence Steele on January 17, 1940. He played the last 23 games of the season, and 6 playoff games.

Jarvis was re-instated as an amateur, December 1940, and played 1 season with the Geraldton Gold Miners before WWI took effect on Hockey.

Jarvis played one final season in 1943-44 with the Hershey Bears.

Jarvis later turned to coaching, and led the 1950-51 Fort Frances Canadians to the Western Canada championship, and a birth into the Allan Cup finals.

James 'Bud' Jarvis was inducted into the Northwestern Ontario Sports Hall of Fame in 1998.