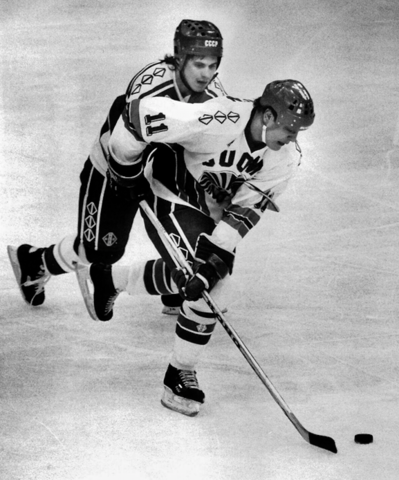 Tikkanen made his NHL debut with the Edmonton Oilers on May 23, 1985, which was game 2 of the 1985 Stanley Cup finals vs Philadelphia Flyers at the The Spectrum in a 3-1 Oilers win. He got a 2 minute minor penalty in the game. Tikkanen also played games 3 and 4 of the finals, as Edmonton won the Stanley Cup in 5 games.

Tikkanen was selected to play in Rendez-vous '87 representing the NHL All-Stars vs the Soviet Union in a 2 game series. Tikkanen had a assist and a penalty in the first game, which the NHL won 4-3. Soviets won game two 5-3.

Tikkanen was known for his chippy and aggressive style of play.......in your face. He was nicknamed "The Grate One" (a pun on teammate Gretzky's moniker "The Great One") for his ability to irritate opposing players, often just by talking to them in his Finnish-English "Tikkanese" or "Tiki-Talk."

Tikkanen set a new NHL record with two shorthanded goals just eight seconds apart vs Allan Bester of the Toronto Maple Leafs on November 12, 1988. Goals were scored in the 1st period at 10:44 and 10:56. Tikkanen had 3 goals, 1 assist in a 6-2 Oilers win.