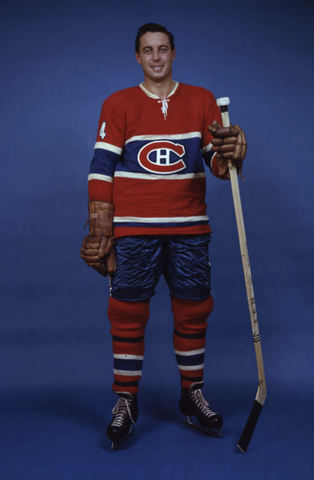 The Béliveau family had a backyard ice rink on which their children, friends and neighbours played shinny. Until he was twelve years old, the family rink was where Jean learned to play Hockey. His first organized team was in a house league at L'Académie, which played on the school's rink. As part of a squad of L'Académie 'all-stars', Jean played against other local teams. At age fifteen, he entered College and played for its team and an intermediate team, the Victoriaville Panthers. Béliveau then joined the Victoriaville Tigres for 2 seasons from 1947 to 1949.

Béliveau was already a star at 15 when spotted by Canadiens general manager Frank Selke, who sought to sign him to an NHL "C-form". The standard league contract for young players at that time, it would have required Béliveau to join the Canadiens at a set date and agreed-upon salary. Béliveau signed a "B-form" instead, agreeing to play for Montreal should he ever decide to turn pro, but on his father’s advice he played in Quebec, first for the Quebec Citadelles in 1949 at the age of 18, in the province’s junior league and then for the senior league Quebec Aces.

Béliveau became a star in Quebec's amateur leagues, and was called up twice for brief appearances by the Canadiens in 1950–51 and 1952–53. He led the Quebec Senior Hockey League in scoring in 1953. However, he did not appear to show much interest in playing professionally. Finally, Selke got an idea—if the QSHL were somehow turned into a professional league, Béliveau would be a professional as well, and under the terms of the B-form he would have to sign with the Habs. At Selke's suggestion, the Canadiens' owners, the Canadian Arena Company, bought the QSHL and converted it from an amateur league to a minor pro league. This forced Béliveau to join the Canadiens for the 1953–54 NHL season.

When he did finally don the bleu, blanc et rouge, he wasn’t exactly an overnight sensation, scoring 13 goals in 44 games as a 22-year-old rookie in the 1953–54 season. He took his game to another level in his second year with 37 goals and 73 points in 70 games.

The 1955–56 season he called his best: a league-leading 47 goals and 88 points. Béliveau won both the Art Ross Memorial Trophy as the league's scoring champion and the Hart Memorial Trophy as its most valuable player. That year Béliveau also became the first Hockey player ever to appear on the cover of Sports Illustrated when his portrait graced the January 23rd issue.

Beliveau continued his upward march through the NHL, breaking his personal best mark of points in 1958-59 and winning another league scoring championship.

Over the next five seasons Béliveau was voted to the NHL’s First All-Star Team four more times and to the Second Team once. By the age of 28, he had raised the Stanley Cup five times and had become the defining player on the best team the league had ever seen.

In 1961, Béliveau was elected captain by his peers, in his mind the greatest Hockey honor he has ever received. He proudly wore the “C” for the next 10 years, which remains the longest tenure of any captain in Canadiens history.

When Béliveau first wore the "C," Montreal was a team in transition with its stars of the ’50s (Maurice Richard, Boom Boom Geoffrion, Doug Harvey and Jacques Plante among others) having exited the scene or soon on the way out.

When the Canadiens won their next championship in ’65, Béliveau was one of four holdovers in the lineup from Montreal’s last previous winning trip to the final. He also won the first-ever Conn Smythe Trophy, recognizing him as the most valuable player in the league’s post-season. He is also the first and only captain to win the Conn Smythe and score the game-winning goal in the same night.

In 1971 he became only the fourth player in NHL history to score 500 goals and had earlier surpassed the 1,000 point mark. Béliveau retired in 1971 as a winner, winning his tenth Stanley Cup with the Canadiens, and his team's all-time leader in points, second all-time in goals and the NHL's all-time leading playoff scorer.

Béliveau was a passionate Canadian federalist. In the early 1990s, he twice declined Canadian Prime Minister Brian Mulroney’s offer of a Senate appointment, as he believed legislators should only be elected. In 1994 Prime Minister Jean Chrétien offered him the post of Governor General of Canada. Béliveau declined in order to be with his daughter and two grandchildren, Mylene and Magalie, whose father, a Quebec policeman, had committed suicide when the girls were five and three. He continued to serve as an ambassador for the Montreal Canadiens.

Béliveau was given many awards including several honorary doctorates from Canadian universities, plus the Loyola Medal in 1995. He was made a Knight of the National Order of Quebec in 1988, promoted to Officer in 2006 and Grand Officer in 2010.

On May 6, 1998, Béliveau was made by Governor General Roméo LeBlanc a Companion of the Order of Canada, then the country's highest civilian award. In 2001, his name was added to Canada's Walk of Fame, the same year he was honoured with his portrait on a Canadian postage stamp. In August 2008, the Canadian Pacific Railway named a station in his honour. On June 29, 2009, he was named an honorary captain of the men's national team for the 2010 Winter Olympics.

Almost one year to the day that Canadiens great Jean Béliveau died, the Longueuil street where he lived for more than 50 years was re-named in his honour - Jean Béliveau St.
The Béliveaus lived on Victoria St. for 53 years.

Hundreds gathered outside Mary Queen of the World Cathedral to pay their final respects to Canadiens legend Jean Béliveau. Two large TV screens were set up outside the church.

The Béliveau family, including his widow Élise, arrived first, followed by Montreal Canadiens alumni, and players and management of the current team.

There was silence as the hearse pulled up to the doors of the basilica — then a round of applause as the casket was carried out. The casket was draped in a blue, white and red Montreal Canadiens flag and was carried by Canadiens pallbearers: Guy Lafleur, Serge Savard, Yvan Cournoyer, Jean-Guy Talbot, Phil Goyette and Bobby Rousseau.

Inside the cathedral, thousands of people filled the pews for the funeral.

Three of the Canadiens legends who skated side by side with Béliveau gave eulogies.

Dickie Moore - "I was lucky — lucky to have been with Jean for many glorious years with the Canadiens. Lucky to share many amazing moments together, lucky to have him as a friend. What would you rather be: good or lucky? I was lucky, he was good," Moore said as guests at the funeral mass laughed. "We have all been lucky to have Jean Béliveau in our lives. God bless you Jean, our teammate and friend forever."

Ken Dryden - My first roommate was Béliveau, "He got the double bed, I got the single," Dryden said, adding that he no longer saw Béliveau as a great star but as a captain and a leader.

"No place was too small or remote, because no fan or no person was unimportant.… He treated everyone with such respect. He said the right thing, in the right way — in French and in English — because that’s what he believed and that’s what he was. He made every occasion better. Unlike many other great stars, his presence didn’t diminish others — it made others better."

Yvan Cournoyer - said he always considered Béliveau his captain and leader. "Given our age difference, we developed a relationship almost like father-son," Cournoyer said. "We feel a big empty space in our hearts. You will never be forgotten. Oh captain, my captain, bon voyage."

"Just being in his presence was special," Bettman said as he arrived at the cathedral. "He is revered. He was the epitome of elegance and class. He believed so much not just in the game but in the community. He will be sorely missed."

Despite the deep-rooted rivalry between the Canadiens and the Toronto Maple Leafs, former Toronto goalie Johnny Bower was welcomed amid a group of attending Montréal player alumni.

The Canadiens wore the number four on their team sweaters for the remainder of the 2014–15 season in tribute. On 9 December, during the Canadiens’ game against the Vancouver Canucks, the team draped a Canadiens sweater with the number four over his usual seat 1, Row EE, Section 102 and lit the empty seat with a spotlight during the game. For the first time in years, they did not report a sellout crowd: instead, they listed it as one person less than full capacity — an appropriately understated yet eloquent tribute to the departed legend.