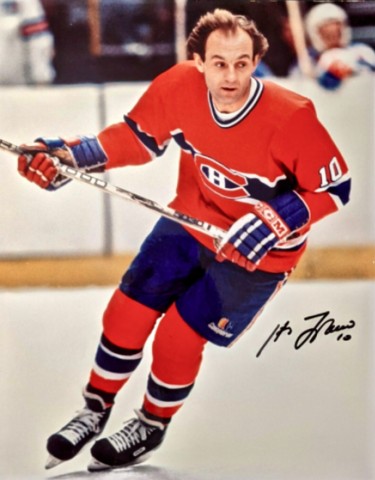 in 1980 Guy Lafleur was made an Officer of the Order of Canada, and in 2005, he was made a Knight of the National Order of Quebec.

Lafleur played at the Quebec International Pee-Wee Hockey Tournament three consecutive years from 1962 to 1964, and scored a tournament record of 64 points.

Guy Lafleur was the recipient of the Lou Marsh Trophy in 1977.

Lafleur is the all-time leading scorer in Montreal Canadiens history with 1,246 points (518 goals and 728 assists) as well as the second-highest goal total behind Maurice "Rocket" Richard.

Lafleur became the first player in NHL history to score at least 50 goals and 100 points in six consecutive seasons.

On February 16, 1985, Lafleur became the fifth player from the Montreal Canadiens to have his sweater number retired.

Lafleur is one of only three players to have returned to the NHL after being inducted into the Hockey Hall of Fame.

In 2017, Lafleur was named one of the 100 Greatest NHL Players by the NHL as part of its centennial celebration.