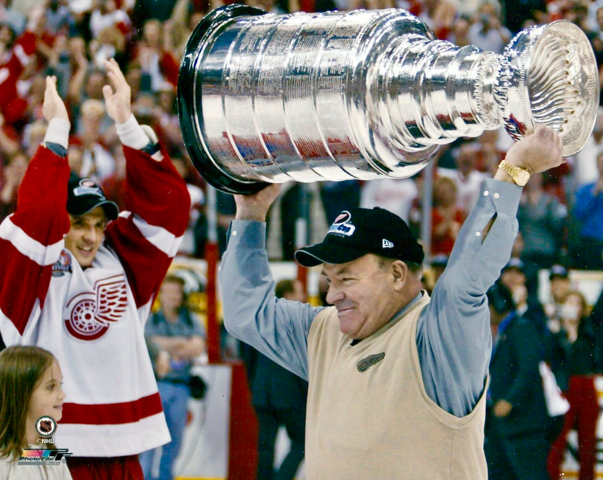 Bowman did play Hockey as a youth and teenager with the Montreal Junior Canadiens and Montreal Junior Royals, but his his dream of playing professional Hockey ended in March 1952, when, playing for the Junior Canadiens, he suffered a fractured skull from a high sticking/slashing to the head from Jean-Guy Talbot in a game played at The Forum. He recovered and then played with the Junior Royals, but he knew his playing days were over.

THE KING of COACHING & MASTER of MANAGING !

Sam Pollock of the Montreal Canadiens gave Bowman his first full-time job in coaching when he asked the 22-year-old coach to become his assistant with the Montreal Junior Canadiens/Ottawa-Hull Canadiens. Bowman would later benefit from the advice of Canadiens head coach Toe Blake and the rest is Hockey history.

At the age of 34, Bowman became a head coach in the NHL with the St. Louis Blues, bringing them to 3 straight Stanley Cup finals (1968,69,70). Bowman then became the Montreal Canadiens head coach on June 9, 1971. The following day, Guy Lafleur was selected by the Canadiens as the first-overall pick. After winning 5 Stanley Cups with Montreal, the Buffalo Sabres offered Bowman the opportunity to being both coach and general manager, which he accepted, keeping that position for the next 6 seasons plus. In the summer of 1990 Bowman accepted a position with the Pittsburgh Penguins as director of player personnel and working with Badger Bob Johnson the Penguins new coach. Following Johnson’s illness and eventual passing, Bowman was again behind the bench of an NHL Hockey team for the 1991-92 season, dedicating the season to Badger Bob. The Penguins won the Stanley Cup. Shortly after leaving the Pittsburgh, Bowman got a call from his friend Jim Devellano from the Detroit Red Wings. Mike Ilitch, the owner of the team, wanted to talk to him about becoming the head coach. 3 Stanley Cup championships later, Bowman retired from coaching, On his terms and as a Stanley Cup champion. He even put on his old skates so he could skate the 2002 Stanley Cup around Joe Louis Arena......what a way to retire.

Bowman coached Team Canada to the 1976 Canada Cup Championship and then 2nd place at the 1981 Canada Cup against the Soviet Union.

After 30 seasons in the NHL, Bowman holds the all-time NHL coaching records for regular season victories (1,244) as well as playoff wins (223) for a combined career win total of 1,467 NHL games. Bowman has coached 2,141 regular season games – another record.

Scotty Bowman was inducted into the Hockey Hall of Fame in 1991.

William Scott (Scotty) Bowman was inducted into the Michigan Sports Hall of Fame in 1999.

Scotty Bowman was inducted int the Greater Buffalo Sports Hall of Fame in 2000.

Bowman was awarded the Wayne Gretzky International Award by the United States Hockey Hall of Fame in 2002.

Scotty Bowman was inducted into Canada's Walk of Fame in 2003.

Scotty Bowman was inducted into the St Louis Sports Hall of Fame in 2011.

Bowman was made an Officer of the Order of Canada "for his contributions to Hockey as a coach and mentor" in 2012.

Bowman was awarded the Order of Hockey in Canada in 2017.