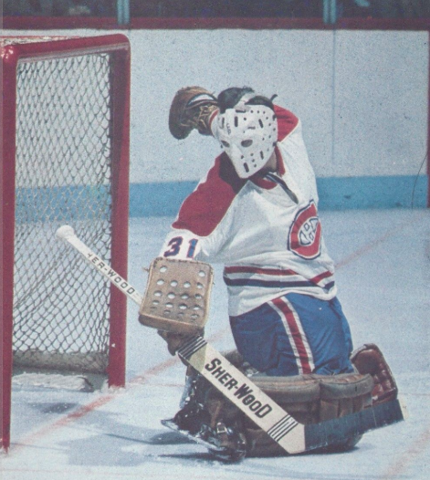 As a young child he was given the nickname “Bunny” by his mother. Throughout his entire life the nickname stuck to the point that his given first name was rarely, if ever mentioned.

In his early teen’s Larocque became the goaltender with the Hull Losiers of the Quebec AAA league. During this time he was called up and played his first game with the Ottawa 67’s of the Ontario Hockey Association / OHA at the age of fifteen in 1967. Larocque played 4 games for the 67s that season, and 4 games for them again during the next season.

Larocque became the 67’s main goaltender to start the 1969-70 season. In his first year he led the OHA league in goals against average (3.63), shutouts (3), games played (51), and minutes played (3,060 minutes). Larocque proved that his rookie season with the 67’s was no fluke; by being named to the leagues second all star team in 1970-71. Larocque led the OHA in shutouts for the second straight year with 5, and led the league in playoff goals against average (3.45) and playoff shutouts with 3.

In 1971-72 the 67’s joined the newly formed Ontario Major Junior Hockey League. Named to the first all star team, Larocque led the league in shutouts for the third consecutive year (3) and goals against average (3.45). Larocque was also picked as an honourary junior with Team Canada for the 1972 Summit Series against the Soviet Union, and was given the opportunity to gain valuable experience by practicing with the best players in the NHL.

Larocque was selected sixth overall by the Montreal Canadiens at the 1972 NHL Amateur Draft. He was the top goaltender taken in the draft.

Larocque made an impressive pro debut the next year with a league leading 2.50 goals against average in 47 games for the American Hockey League / AHL's Nova Scotia Voyageurs. After finishing in first place in the AHL’s Eastern Division with 101 points, the Voyageurs, with Bunny in goal, swept through the first two rounds of the playoffs before bowing out to the Cincinnati Swords in the Calder Cup finals. Larocque was voted on to the AHL second all-star team.

When Ken Dryden sat out the 1973-74 season to finish law school, Larocque was given the starting assignment for the Canadiens first game of the year in Minnesota against the North Stars. In his first NHL game Bunny was victorious in a 5-2 Montreal win, and would play in 27 games as a rookie backing up Wayne Thomas and Michel Plasse, winning 15, with a goals against average of 2.89.

The Canadiens finished in second place behind the Boston Bruins in the NHL’s Eastern division with 99 points and were matched against the New York Rangers in the first round of the playoffs. The Canadiens decided to name Larocque as the starting goalie in the playoffs. Despite posting a respectable 2.97 goals against average, Bunny was unable to stop the Rangers from winning the series in six games.

Dryden returned to the Canadiens at the onset of the 1974-75 season and immediately reassumed his position as the Canadiens number one goalie. For Larocque this meant that his role with the Canadiens now consisted of being the backup goalie to the unquestioned starter.

Over the next five years Bunny established himself as the league’s top backup goalie, one that would have been the starter on many other NHL teams, but instead played behind the best goaltender in the league; Ken Dryden. In the five years as the Habs back-up Larocque posted some gaudy numbers.

As a matter of fact, during his five years spent as the Canadiens backup goalie, Larocque actually posted a better winning percentage during the regular season than Dryden (Larocque’s .701 to Dryden’s .659).

Larocque’s chance to shine came at the onset of the second game of the 1979 Stanley Cup finals. Given the chance to start the game, after watching the team’s previous 64 playoff games from the bench, Larocque was taking the pre-game warm up when an errant shot from teammate Doug Risebrough, knocked him out cold on the Forum ice. While Larocque lied in the hospital, Dryden stepped in and the rest is history. The Canadiens went on to win the game and the next three, with Dryden patrolling the nets, as the Canadiens won their fourth consecutive Cup with Larocque once again, watching from the bench. At the conclusion of the 1979 season, Ken Dryden retired.

Near the trade deadline in 1981, Larocque was traded to the Toronto Maple Leafs for defenceman Robert Picard. Bunny played 50 games the following season with a struggling Maple Leafs team. Larocque was in net when the Buffalo Sabres scored a NHL record of 9 goals in one period in a 14-4 game. He was again traded to the Philadelphia Flyers in 1983 for goaltender Rick St. Croix, and finished his NHL career with the St. Louis Blues in 1984 after being sold by the Flyers, who had settled on Pelle Lindbergh in goal.

Larocque retired from Hockey in 1985 after playing 13 games with the Peoria Rivermen in the International Hockey League / IHL.

After retirement, Bunny went back to the place of his greatest days and became an executive in the Quebec Major Junior Hockey league. In 1989-90, Bunny as the general manager, guided the Victoriaville Tigers to the regular season crown of the league, before they bowed out in the league’s championship finals to Laval. Larocque won the John Horman Trophy as QMJHL executive of the year for 1989–90.

By the spring of 1992, Bunny had been promoted to the vice-presidency of the QMJHL during the 1991–92 season and still held the position at time of his death.