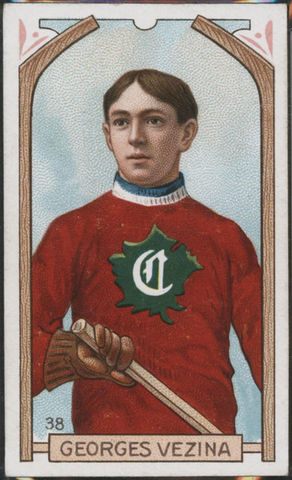 Perhaps no other C55 proof is as distinctive as that of Georges Vezina. From the detail and clarity in Vezina's face, hair, and jersey to the evident variation of the background stippling, this proof almost appears to be a wholly different card from the one that was issued in cigarette packs. It is more refined and better approximates the original photo of Vezina that was also used to create his Sweet Caporal postcard. In addition to the most evident differences, there are faint registration marks near two of the corners and the text on the reverse side has narrower lines.