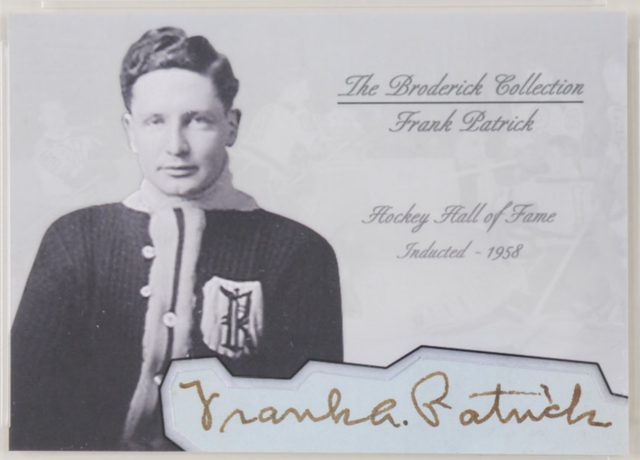 On the reverse of this card, it says;
The Broderick Collection
Frank Patrick

Frank Patrick, a member of Hockey's legendary royal family earned a place in history as one of the visionary and influential figures in Hockey.

Frank loved Hockey and in the years after the turn of the century he became a star. He and his brother Lester were revolutionary, they were the first defensemen to rush with the puck and play an offensive role when the position of defence was used strictly to protect the team's own goal. In 1909 he signed a contract with the fabulous Renfrew Millionaires along side his brother Lester. They made around $3000 a season playing for the Millionaires, $700 a season was the average pay.

Many credit Frank Patrick with creating modern Hockey. The NHL rulebook carries 22 pieces of legislation originated by him, including the introduction of the blue line, the forward pass, penalty shots and the playoff system.

Frank Patrick was inducted into the Hockey Hall of Fame in 1958.