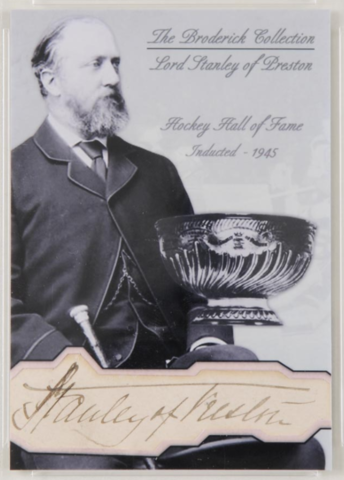 On the reverse of this card, it says;
The Broderick Collection
Lord Stanley of Preston

Sir Frederick Arthur Stanley was the 16th Earl of Derby, 1st Baron Stanley of Preston, Colonial Secretary from 1885 to 1886 and the sixth Governor-General of Canada from 1888 to 1893. Though his resume is great, Stanley will forever be primarily remembered for his donation of the Dominion Hockey Challenge Cup in 1892, now renownedly known as the Stanley Cup. In Canada the cup is a treasured national icon and a cultural symbol now known around the world.

With much persuasion from his sons' who became very active in Hockey, Stanley purchased and donated the trophy as an award for Canada's top-ranking amateur Hockey club. In 1926 the National Hockey League adopted the Stanley Cup as the championship prize in professional Hockey. That this now famous cup bears Stanley's name is a fitting tribute to his encouragement and love of outdoor life and sport in Canada.

Lord Stanley became a charter member of the Hockey Hall of Fame in the builders category in 1945.