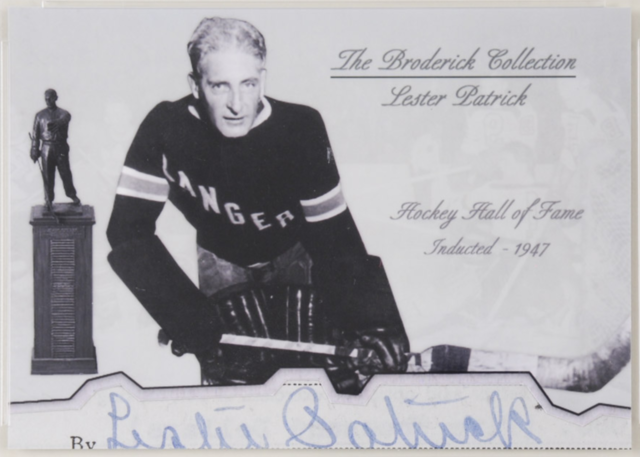 On the reverse of this card, it says;
The Broderick Collection
Lester Patrick

Begining in 1903, Lester "The Silver Fox" Patrick played a significant role in Hockey history for nearly half a century. As a player, he was one of the top rushing defensemen of the day and a pioneer in being so. Patrick was also a inspirational coach and a respected general manager. Along with his brother Frank, he pioneered the construction of artificial rinks and formed the Pacific Coast Hockey Association.

Lester joined the expansion New York Rangers before the start of the 1926-27 season as coach and general manager. In just their second year they won the Stanley Cup and during the finals, the-44-year old substituted for injured goaltender Lorne Chabot in one of Hockey's legendary moments.

Since 1966 the NHL has presented the Lester Patrick Award to honour a recipient's contribution to Hockey in the United States.

Lester Patrick was elected to the Hockey Hall of Fame in 1947.