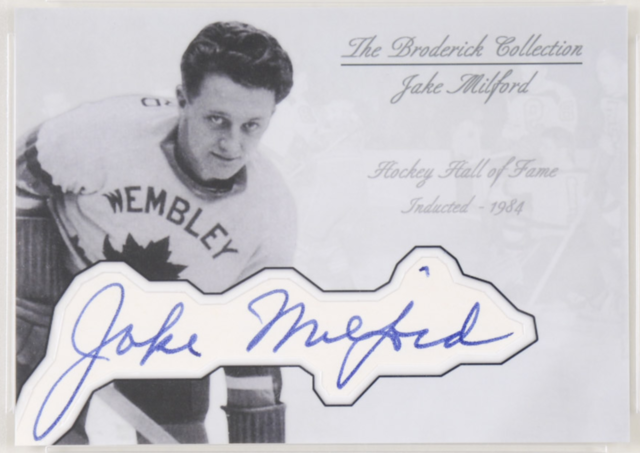 On the reverse of this card, it says;
The Broderick Collection
Jake Milford

Jake Milford played his junior Hockey in the Manitoba Junior Hockey League with the Winnipeg Columbus Club and the Kenora Thistles. He turned down offers from the Detroit Red Wings and the New York Rangers in 1936 to play three years in England.

During his playing days in the American Hockey League, Milford made Hockey history in an unfortunate way by being traded by Eddie Shore foe two sets of used goal nets.

He worked in the New York Rangers system for many years, grooming future stars and winning four Central Hockey League (CHL) championships. Milford was the general manager of the Los Angeles Kings from 1973 to 1977, where he led the Kings to a franchise record 105 points. After 1977 he went to manage the Vancouver Canucks, leading them to a Stanley Cup finals appearance in 1982.

Jake Milford was elected into the Hockey Hall of Fame in 1984.