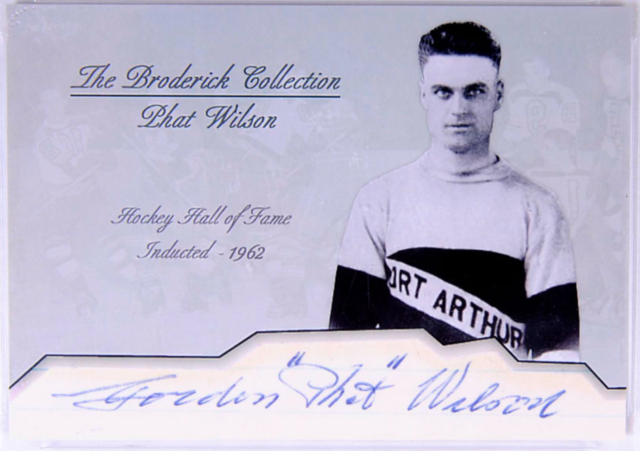 On the reverse of this card, it says;
The Broderick Collection
Phat Wilson

There are few men who have done more for Hockey in their native communities then has Gordon Allan "Phat" Wilson.

With two seasons of senior Hockey under his belt, he tried his luck in the NOHA with Iroquois Falls in 1921-22. The team made it to the Allan Cup playoffs, eventually losing to the Toronto Granites.Wilson returned home and stayed with amateur Hockey, eventually guiding Port Arthur to the Allan Cup in 1925, 1926 and 1929. His play did not go unnoticed by the pros and he was offered contracts with Edmonton, Calgary and Toronto but turned them all down.

He was noted as an all time great amateur player whose long rushes down the ice contributed to his winning the senior scoring title as a defenceman. Although he retired from active play in 1933 at the age of 37, he stayed very active in the Hockey and sports scene in Port Arthur.

In recognition of his Hockey prowess and lifelong commitment to the Port Arthur sports scene, Wilson was inducted posthumously into the Northwestern Ontario Sports Hall of Fame at its first induction ceremonies in 1982.