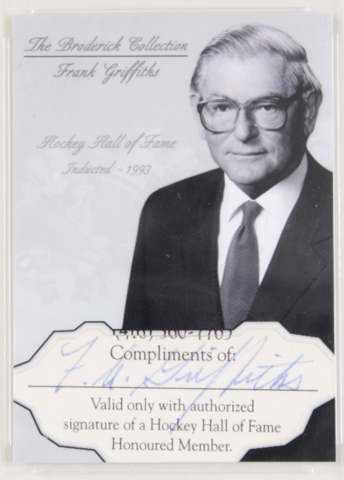 On the reverse of this card, it says;
The Broderick Collection
Frank Griffiths

Frank Griffiths was a successful media mogul whom had great love for the game of Hockey and for his community. Frank was very well respected by his peers and was a highly visible member of the NHL administration.

In 1974, Frank became the owner of the Vancouver Canucks. The decision to buy the Canucks was not just a business move, but one based on a strong belief of community support. The change of ownership brought much needed stability to the floundering team and new found fan support. He became a member of the Board of Governors of the National Hockey League that same year, and five years later, became Vice-Chair, a position he held until 1987. During that time, he helped to stabilize several league franchises, played a integral role in merging the NHL with the WHA, and was instrumental in bring Russian Hockey players to Canada to play in the NHL.

Frank contributed his time, energy and expertise to many organizations, generating millions of dollars to a wide variety of causes and was always incredibly modest, always diverted the spotlight onto others.

Frank Griffiths was inducted into the Hockey Hall of Fame in 1993.