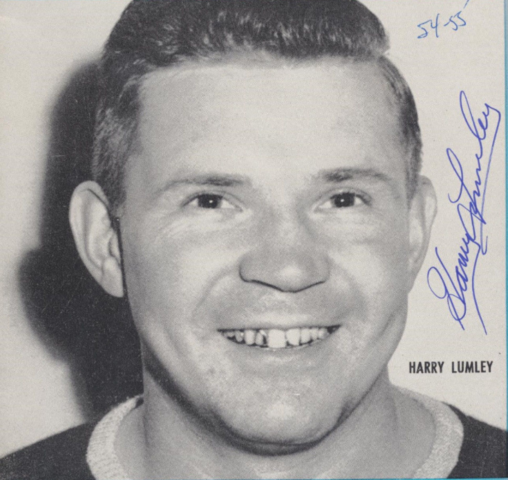 Lumley made his professional debut in the National Hockey League, however, with the New York Rangers in the 1943–44 season, when he was loaned to the Rangers for a single game. Rangers starting goalie Ken McAuley was felled by an injury and could not finish the final 20 minutes of the game. Without a back up, the Wings agreed to loan their young goalie for the rest of the game.

As a result Lumley debuted as a 17-year-old rookie in the National Hockey League, he was (and remains) the youngest goaltender to play in the NHL.

Lumley also played 2 games this season for the Red Wings, after being called up from the Indianapolis Capitols of the American Hockey League. He gave up 13 goals in the Detroit losses, though most people excused the 17-year-old, who at the time wasn't old enough to vote or cross the border without permission.

Lumley was sent back to Indianapolis for half of the next season before earning the Red Wings starting goalies' job from incumbent Connie Dion. He finished the year with a 24-10-3 record. He was especially effective in the playoffs, backstopping Detroit to within one game of the 1945 Stanley Cup. Detroit met the Toronto Maple Leafs in the finals. The Leafs' goalie, Frank McCool, was also a rookie and got off to a fast start, winning the first three games of the series by shutouts to set an NHL record. Lumley rebounded in games five and six to post two shutouts of his own to force a seventh and deciding game, a 2-1 thriller won by Toronto.

Over the next five years, Lumley and the Red Wings established themselves among the league's best in a very competitive era. Twice he led the league in wins and games played and had the most shutouts during the regular season in 1947-48. In the 1950 Stanley Cup playoffs, Detroit overcame the loss of Gordie Howe to a serious injury in the semifinal series against Toronto. The Leafs were the three-time defending champions and the team that had swept the Wings in the two previous finals. The Wings defeated the New York Rangers after playing two games of the final series in hated Toronto because of the circus using the arena in New York. Lumley was sensational in back to back 7 game series against the Leafs and the Rangers en route to his only Stanley Cup championship. He posted a minuscule goals-against-average of 1.86 and a league leading 3 shutouts.

During the tail end of the 1949-1950 season, Lumley was injured and young Terry Sawchuk was called up to man the Detroit net for seven games. Sawchuk impressed Red Wings manager Jack Adams, and only a week after hoisting the Cup, Lumley was traded to the Chicago Black Hawks, the league's worst team, in a nine-player deal. Lumley spent two seasons with the hapless Black Hawks. Lumley tried valiantly with a Black Hawks team that only provided him with enough help for 29 wins in 134 games.

By 1952, the Toronto Maple Leafs great post-war dynasty was over and they were looking to rebuild. One man they never forgot was Lumley. All of those great battles between the Leafs and Wings earned Lumley a great deal of respect among the powers-that-be in Toronto. The Maple Leafs traded away an impressive package of Al Rollins, Gus Mortson, Cal Gardner and Ray Hannigan to land their former nemesis.

The Maple Leafs weren't as bad as the Black Hawks, but they were a shadow of the team that Lumley used to upstage. Lumley instantly made them respectable, and in the process he posted some of the most amazing seasons any goalie has ever enjoyed in Hockey history. Lumley would term his playing days with the Maple Leafs as "my best playing days."

Lumley had an interesting season in 1954-55. He kept his team in most games, as suggested by his unusual record of 23 wins, 24 losses and 22, yes, 22 ties - which still stands as an NHL record. His 8 shutouts and 1.94 goals against average earned him a second consecutive first all star team nomination. More importantly, Lumley advanced an otherwise average Leafs team into the playoffs, only to be bumped early once again.

Lumley returned to mortal status in 1955-56 when he posted just 3 shutouts and a 2.70 goals against average. But his 21 wins in 59 games was enough to again qualify the Leafs for the playoffs, only to be knocked out early yet again.

In 1956, Lumley was traded back to Chicago. He refused to play in Chicago and played the next 3 years in the American Hockey League. He played with the Buffalo Bisons and the Providence Reds. Lumley would return to the National Hockey League in 1957 with the Boston Bruins. He played irregularly with them from 1957 to 1960 as he rotated his duties with Don Simmons - one of earliest goalie tandems in the NHL. He would play one final season with the Winnipeg Warriors in the Western Hockey League.