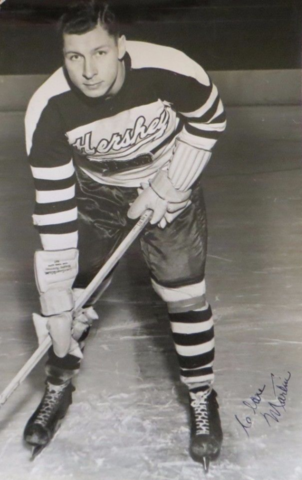 Although Martin spent the majority of the '46-47 season with the Bruins' AHL farm team the Hershey Bears, Martin was back with Boston for the full season in 1947-48. But again, he was sent to Hershey where he played the full 1948-49 season with the Bears.

Martin was traded to the Detroit Red Wings in the summer of 1949 along with Pete Babando, Lloyd Durham and Jimmy Peters for Pete Horeck and Bill Quackenbush. He helped the Red Wings win the 1950 Stanley Cup championship, playing in 10 of 14 playoff contests.

Martin then became captain of the Kitchener-Waterloo Dutchmen senior Hockey team in 1952, winning the Allan Cup as Canada's amateur champions in 1953 and 1955.

With the win in 1955 the Dutchmen represented Canada at the 1956 Winter Olympics in Italy. However Martin was not eligible to play because of his background as a professional.

Clare Martin retired after the 1955 season.