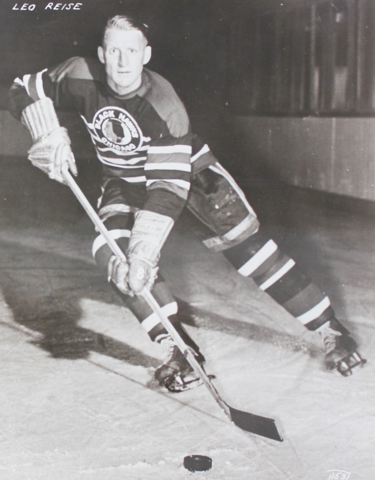 During his bantam days, young Reise would sneak out onto the ice while his father was coaching intermediate Hockey in Guelph and senior Hockey in Chatham.

After playing junior Hockey for the Brantford Lions from 1939 to 1941 and the Guelph Biltmores in 1941-42, Reise joined the navy where he laced up for the naval teams in Victoria, Halifax and HMCS CHIPPAWA in Winnipeg where he played on the 1945 Basil Baker trophy winning team. At the close of World War II, he turned pro with the Blackhawks. In Chicago, he played parts of two seasons with frequent visits to the minors. He was then traded to the Detroit Red Wings in 1946, an event that marked the real beginning of his NHL career.

played six seasons with the Red Wings where he worked as a fiercely proud journeyman in the shadows of the likes of Gordie Howe. Reise Jr. never really minded, as was part of two Stanley Cups championships.

His third-period shorthanded goal in Game 7 of the 1949 semifinal against Montreal snapped a 1-1 tie and propelled the Wings to a 3-1 victory. That goal was reputed to be Reise vs the Canadiens, as Reise gathered the puck in his own zone and battled along the boards past all five Montreal skaters before driving a 40-foot shot past Canadiens goalie Bill Durnan.

Then against Toronto in the 1950 semifinals, Reise whipped a backhand off the leg of Leafs defenseman Gus Mortson and behind goalie Turk Broda after 20:38 of overtime for a 2-1 victory. With the seventh game of the series scoreless and into the second OT session, Reise lifted a 35-foot backhander through a crowd past Broda and the Wings moved on to meet and defeat the New York Rangers in the Stanley Cup final.

"Well I think it has to be the year we won the Stanley Cup in '49-50 when I scored the two overtime goals against the Toronto Maple Leafs to eliminate them out of the semi-finals. It was a pretty rough series. I think those goals I scored in overtime were probably the highlights."

Reise would be back in the 1952 Stanley Cup finals vs the Montreal Canadiens. The Red Wings would win the series 4–0, shutting out the Canadiens twice and allowing one goal in each of the other two games. By doing so, the Red Wings became the first team to go perfect in the playoffs.

Reise then finished his pro career off by playing two more seasons with the New York Rangers.

When Leo Reise Jr. entered the NHL in 1945, it was the first time in league history that a father and son had both made it to the NHL level.